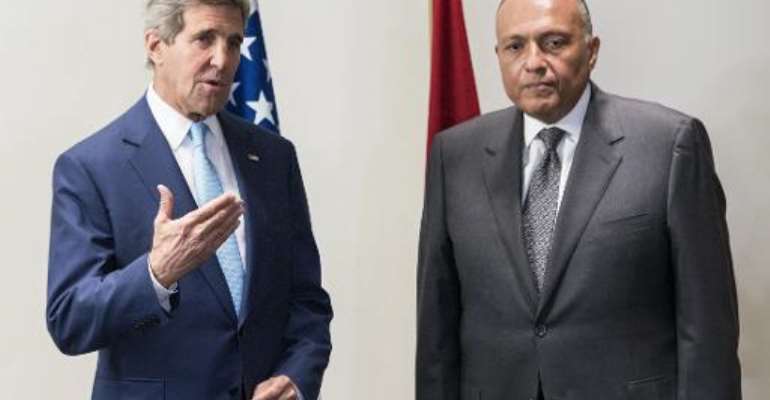 Kerry became the highest-ranking US official to meet President Abdel Fattah al-Sisi since he came to power earlier this month, as part of a rocky transition to democracy since the ousting of long-time leader Hosni Mubarak in 2011.

The top US diplomat's tour is also focused on trying to find a political solution in Iraq, where Islamic militants were Sunday making new gains in an offensive that has triggered international alarm.

"I emphasised also our strong support for upholding the universal rights and freedoms of all Egyptians including freedom of expression, peaceful assembly and association," Kerry said at a news conference, referring to his talks with Egyptian leaders including Sisi.

"We also discussed the essential role of a vibrant civil society, free press, rule of law and due process in a democracy."

Kerry's call for a free press in Egypt comes as a court on Monday is due to deliver its ruling in the trial of three Al-Jazeera journalists and 17 other co-defendants, accused of aiding the blacklisted Muslim Brotherhood of ousted president Mohamed Morsi.

Their trial, in which the three journalists are accused of "spreading false news" and links to the Brotherhood, has sparked an international outcry as rights activists fear Egypt could return to autocracy worse than under Mubarak.

"Obviously this is a critical moment of transition in Egypt, enormous challenges," Kerry said in Cairo as he met new Foreign Minister Sameh Shoukri.

But he vowed that "the US is very interested in working closely" with the new government "in order to make this transition as rapidly and smoothly as possible".

Since Egypt's first freely elected leader Morsi was toppled by Sisi in July 2013, a government crackdown on his supporters has left more than 1,400 people dead in street clashes and at least 15,000 jailed.

An US official told journalists travelling on the plane with Kerry that "the Egyptian government needs to have a very politically inclusive approach, which means that they need to include and find ways to reach out to the Muslim Brothers".

Kerry's visit comes a day after an Egyptian court confirmed death sentences for 183 Islamists, including Brotherhood chief Mohamed Badie, after a speedy mass trial that sparked an international outcry.

US officials also revealed that $572 million (420 million euros) in aid, which had been frozen since October, was released to Egypt about 10 days ago after a green light from Congress. It will mainly go to pay existing defence contracts.

US officials said in April they planned to resume some of the annual $1.5 billion in mostly military aid to Cairo, including 10 Apache helicopter gunships for counterterrorism efforts in the Sinai Peninsula.

"The Apaches will come and they will come very, very soon," Kerry said minutes before he ended his trip.

Before flying to Amman, Kerry called on "Iraq's leaders to rise above sectarian considerations... and speak to all people," and insisted that Washington is not responsible for the current crisis roiling that country.

Egypt, one of only two Arab nations to have a peace treaty with Israel, has long been seen as a key strategic ally and a cornerstone to regional stability.

But the political turmoil since Mubarak's ouster has paralysed the nation, leaving it more concerned with domestic problems than regional matters despite the upheavals of the Arab Spring.

"There's a strong desire on the part of the United States for this transition (in Egypt) to succeed," a senior State Department official said.

"We have a longstanding relationship... that's built on several different pillars. It's at a difficult juncture right now, that's true, and we have serious concerns about the political environment," he added.

Washington's concerns about Cairo include a new law controlling demonstrations, "the lack of space for dissent, mass trials and death sentences," said the official.

"We are concerned that some of the tactics they're using to address their security issues are polarising... they in some ways radicalise certain aspects of Egyptian society in ways that are not supportive of overall stability."