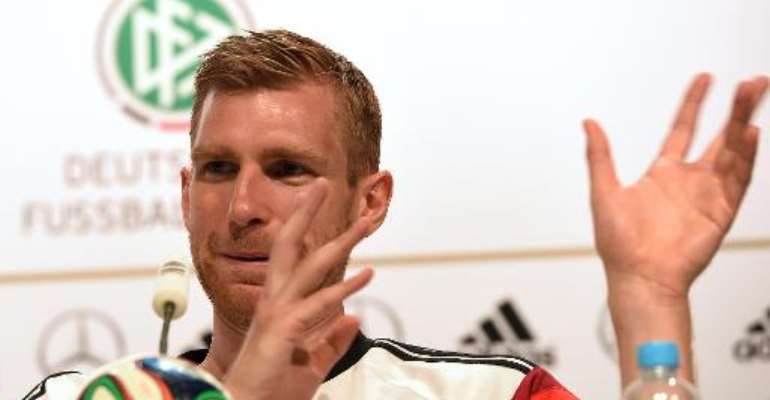 Germany's defender Per Mertesacker gives a press conference in Santo Andre on June 19, 2014 as part of the FIFA 2014 World Cup in Brazil. By Patrik Stollarz (AFP/File)

Fortaleza (Brazil) (AFP) - Per Mertesacker makes a landmark 100th appearance for Germany after Joachim Loew named the same side which trounced Portugal 4-0 for their second World Cup Group G match against Ghana in Fortaleza on Saturday.

Vice-captain Bastian Schweinsteiger has to again be content with a place on the bench while Thomas Mueller, who scored a hat-trick against Portugal, starts ahead of veteran striker Miroslav Klose.

Mats Hummels won his race to be fit after suffering a thigh injury in Salvador on Monday and partners Mertesacker in central defence.

Ghana coach Kwesi Appiah made four changes to the side which lost their opening game against the United States.

The Berlin-born Schalke 04 star will face his half-brother Jerome Boateng, who is at right-back for Germany.