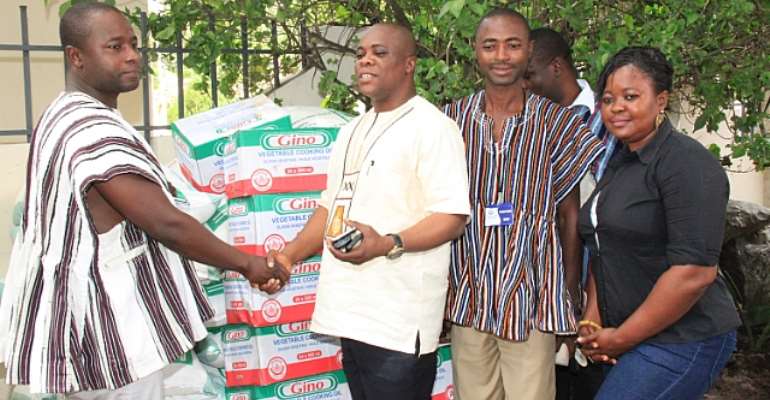 The UK & Ireland Branch of the Gonjaland Youth Association has donated food items comprising 18 bags of rice and 10 cartons of cooking oil worth 600 British pounds (approximately 3,000 Ghana cedis) to the victims of a rainstorm at Daboya.

Mr Isahaku Kotomah, the Organiser of the UK & Ireland Branch who did the presentation in Accra said the donation is a token from the UK branch and would be followed with used clothing in three weeks.

On 20th April, 2014, Daboya the capital of the North Gonja District was devastated by a rainstorm leaving hundreds homeless and destroying property worth thousands of Ghana cedis.

Mr Awudu Sannie, the President of the UK branch who spoke to Mahama Haruna, the PRO of the National Gonjaland Youth Association from UK said they are committed to the development of Gonjaland and will do their best to help achieve that. According to him the UK branch would liaise with some NGO's in the UK to partner them to bring development to Gonjaland.

He said they have already written a proposal to link up Newsisham Southwark College (LeSoCo) in London to Bole Senior High School which when approved would mean computers, books, teaching aids and learning materials would be donated to Bole Senior High. Mr Awudu said measures should be taken to sustain 'Asansan' the first Gonja speaking programme on TV.

He called on government to seriously consider bridging the White Volta River at Daboya to make the town accessible to Tamale, the Northern Regional capital. According to him there was an effort to build a bridge over the White Volta in Daboya in the 1960's but after the overthrow of the Busia regime in 1972, construction stopped and remnants of the concrete can still be seen on the river and its banks.

The President of the National Gonjaland Youth Association Mr Alhassan Dramani thanked the UK branch for their assistance. He entreated all diaspora branches of the Association to be concerned about issues at home. He said the items would be presented to the victims of the Daboya rainstorm disaster which occurred a few months ago.