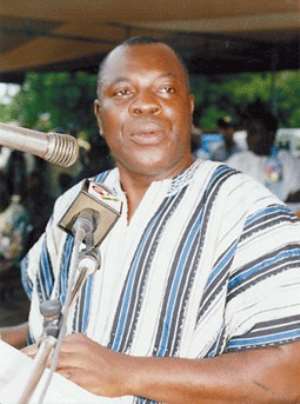 Mr KWASI Owusu-Yeboah, the Volta regional minister, last week presented to the media in Ho, a long list of development projects undertaken by President John Agyekum Kufuor's administration since occupying the seat of government, including a comprehensive road network programme.

Road projects completed so far include the 4km Ho missing link road, the 16km Sokode-Abutia road and the 11km Akrofu- Bame road. The Klefe junction-Klefe, Ziavi-Anfoeta as well as the Tanyigbe-Atidze roads have all been given a new motorable lease of life, he said.

He also disclosed that there have been major maintenance works on the Ho-Nyive, Honuta-Kpedze, Fume-Dzolokpuita and Ho-Ahunda roads. “Indeed there is close to 25000 km extensive routine maintenance on feeder roads to attest to government's commitment to open up access to economic activities in the region”, he said.

The regional minister told journalists on a verification tour of the region that quite a number of the projects, with either direct government or donor funding, have been completed or are in the process nearing completion.

In the Ho district for instance, he said, ¢2.4 billion cedis were spent on rehabilitating the Ho central market, ¢7.5 billion on the market mall complex, ¢179.5 million on the 2-bedroom Hlefe nurses quarters, ¢85 million on the Abutia satellite communication system and ¢154 million on the mechanization of a borehole at Anyinawase.

Also briefing the journalists during a call on him, the Ho district Chief Executive, Mr Mawutor Goh, disclosed that the NPP government had spent billions of cedis on educational infrastructure throughout his district from basic through secondary to tertiary level to help create wealth in a region that has “suffered badly despite its unsurpassed loyalty” the erstwhile Rawlings regime.

Significant among these, he said, are the ¢298 million Avenui JSS complex, the ¢135 million Etodome JSS block, the 4-storey classroom block for Ho Polytechnic as well as the Headmaster's bungalow for Abutia Secondary School.

The DCE especially urged the opposition MPs in the area to show commitment that they are part and parcel of the general process of governance, including the needs assessment and activities of the people.

The situation was not different in the Ketu district where more than 15 towns and villages had received water extension schemes totalling over 6 billion cedis. Notable among them, according to DCE Linus Koffie, are the coastal belt water supply schemes at Adina, Blekusu, Amutinu and Glidz-Afuta and Avloto. Others include ferro-cement rain water harvest tank at Tokor-Aflao, Kpoglu Kporkuve, Xipe and Dekpor. Meanwhile, rehabilitation works on the Ohawu irrigation scheme, Ative reinforced concrete surface water tank as well as the ¢2 billion Danida-assisted Ngokpo water supply project are all in the final phases of completion, he said.

According to DCE Koffie his district has “seen much infrastructural development since January 2001” as 100 out of 150 different projects executed by the Assembly have been completed, including the ¢1.8 billion Dzodze market facelift project. Meanwhile, he has appealed to the Ministry of Health to send in technicians to fix the ¢156 million radioactive mamogram machine, bought with HIPC funds for the Aflao District Hospital.

Earlier this year, he disclosed, the ¢65 million Kporkuve teachers quarters were commissioned to spare teachers the daily trouble of trekking 6kms between Afife and Kporkuve.

Meanwhile, the magnificent 84 million dollars Keta Sea Defence Wall has been completed and handed over. However, sources say the local people have refused to occupy the housing project supposedly because “it was not the NDC that executed the project”.