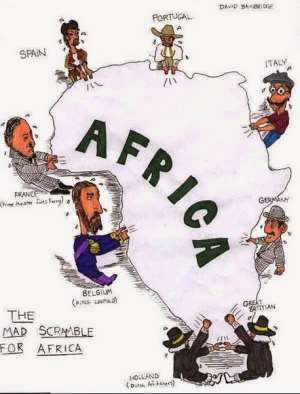 There is no other continent on the planet that has more at stake in the post 2015 development agenda discussions than Africa.
Africa is largely seen as having made the least progress toward the existing Millennium Development Goals, and much of the current discussion is focused on finding more meaningful, cross cutting, practical, and fair goals and targets, and ways to measure progress that are as relevant and actionable to Africa as they are to other developing regions.

As world leaders, including those from Ghana, which plays a prominent role in the discussions as a member of the Open Working Group, continue these discussions to shape the post-2015 development agenda, it is useful to step back and consider the parable of the drunkard and the streetlight.

The story is that one night, a police officer sees a drunk man searching under a streetlight and he asks what the man has lost. The man responds that he lost his keys and they proceed to search together. After a few minutes, the police officer asks if the man is sure he lost them near the streetlight. The man responds, no, he lost his keys in the park, but he is searching near the streetlight because 'that is where the light is.'

In our current dialogue regarding the framework to replace the Millennium Development Goals (set to expire in 2015), we have to guard against this 'observational bias' - we need to carefully select the goals, targets, and indicators that best guide the fight against global poverty and inequality and best measure progress, rather than choosing goals, targets, or indicators that are less meaningful but can be measured relatively easily.

While we acknowledge that it is often extremely difficult to reliably measure what is really important, we must and can do better.

Take secure land rights for women and men for example. There is a growing chorus of voices - including governments, civil society, and other world leaders - calling for the issue to be explicitly included in the post-2015 development agenda because strengthening such rights, particularly for women, can help address multiple development goals. Most recently, the Open Working Group co-chairs -- identified rights and access to land, property, and other assets and resources as a critical cross-cutting issue and priority concern under four focus areas - poverty eradication, gender equality, food security, and rule of law. A target to increase and strengthen land rights for women and men under one or more goals in the SDG/post-2015 agenda will contribute mightily to other goals as well, as highlighted in this infographicand this website.

But to ensure that we are working towards precise and impactful goals and targets, we need to meaningfully measure progress.

Take women's land rights in particular.
An estimated 70 percent of Africa's farmers are women. The vast majority don't formally own the land they farm. In fact, their rights over the land are undermined by a often discriminatory and sometimes conflicting web of statutory law, customary laws, norms, and traditions.

So how can we measure improvements to the number of women with secure rights to land?

One approach could simply look at the degree to which a country's laws recognize women's rights to own, control, and inherit land. Countries across Africa have implemented laws that formally assert equal rights for women to ownership of land and property - an important step in strengthening women's land rights. But the reality on the ground frequently tells a different story.

Consider the situation for Ghana's women. In 1985 the state passed the Intestate Succession Law and the Head of Household Accountability Law in order to ensure that widows were not thrown off family land and that women had a voice in decisions about family resources. However, a 2008 study by the UN's Food and Agriculture Organization (FAO) in Ghana's Volta Region found that most women didn't know about the laws and few enjoyed its protections.

So, while measuring legal frameworks may be the easiest route to assessing secure land rights for women, it is also the most fraught with the potential for false positives. The existence of laws, policies, and regulations protecting women's rights, does not mean that women can actually exercise those rights.

Given that such a lack of implementation is not unique to Ghana, there is good reason to measure instead an element that better reflects whether women in fact have secure rights to land. One such way is to measure documented evidence of such rights in the form of titles or certificates of ownership. While not perfect, this measure would go a long way toward revealing whether women in fact are realizing their rights on the ground.

In Ghana, for example, studies show that women hold land in less than 10 percent of households and that only 1 percent of women report holding formally documented ownership of agricultural land.

We need to ensure that current efforts to formulate a new path forward and to identify the missing dimensions of the Millennium Development Goals are not an exercise in futility that will leave us with a measure of the growing wealth of developing country elites or one that reflects theory rather than reality. We need to guard against the natural inclination to search under the streetlight because it is easier.

To ensure that Ghana and other developing countries achieve gains in poverty eradication, gender equality, food security, rule of law, and environmental sustainability, we need to focus on our prior blind spots, shining a light in areas previously largely unmeasured - such as the percent of women who have documentation of a range of rights to land to ensure that growing numbers of women have real secure rights to land and other productive resources and a path out of poverty.

Tim Hanstad is Law Lecturer at the University of Washington School of Law and President and CEO of Landesa, a global development non-profit that works to secure land rights for the world's poor women and men. Follow us @Landesa_Global and visit http://landpost2015.landesa.org/

Latest Photo Reports
Catch up with all the political quotes from our politicians.
Advertise here
More from Opinion
ModernGhana Links
Smart Strategies To Promote And Grow Small Businesses
The case for Raila Odinga as Kenya’s next President
Nurturing Creativity In Young Learners Is Crucial In Today’s Changing World
TOP STORIES