THE VEIL OF SUPERSTITION – AFRICA’S BURDEN OF DARKNESS 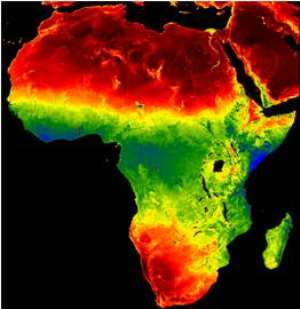 Africa continent has remained one place of shadow shredded in the mystery of progressive setbacks. Many individuals had tried to demystify the ever setbacks that have confounded the continent over centuries but to no avail. The pattern of Africa's distraught is seen in all her countries. There is such a constant shadow that had refused to give way to a dawn of new age, glory and honour. The thick nature of these dark shadows continues to haunt and taunt the continent and has left it with little or no room to find answers to many recurring questions. What could be Africa's ailment? What is still holding Africa back from realizing its full potentials? Africa has remained a fertile ground where all forms of human discomforts are grown. Self-denial and lack of faith in its people continue to be a major illusion deluding the continent. Africa continues to sit in a mud and has not thought of rising up to wash off the dirt. A continent clothed in sacks wailing and weeping for her many pains and hopelessness. What has been the burden of darkness of the continent? A veil of superstition still covers the face of the continent allowing for constant darkness, mystery and illusion which nurture her dissipations.

Africa has long standing history of deep superstition composed in the beliefs of many uncertainties. Strong beliefs in witchcraft, juju, gods, ancestors, black magic, sorcery, necromancy, ghost etc. have converged as thick cloud over the minds of her citizens. Many Africans live in constant fear of these beliefs and strongly embrace them as a way of life. Witchcraft and wizardly prevail across the continent and are employed largely to haul people down and even end their lives. People use juju to procure fast riches and trigger their businesses and fight others in the contest of life. People put faith in juju in solving life problems on this part of the continent. Strong believes in gods and ancestors are found in almost all the countries in Africa. The gods according to strong Africa tradition dictate the pace of men and order their steps and above all control the affairs of men. Huge sacrifices are made to these deities as well as the ancestors to avert misfortunes which are purely natural such as earthquake, flooding, outbreak of diseases, hunger. People invoke curses on their enemies in the name of the gods and ancestors. Sorcery, necromancy and glare occultism prevail across the continent unabated. These are the roots of African superstition and it is deep seated in the minds of people and in the heart of the continent.

The continent of Africa has become the breeding ground for demons and dark spirits because most of the practices invite the presence of these forces of darkness. Everything associated with misfortunes is hugely represented on the African continent. Hard-core poverty; hunger, diseases, wars, atrocities and sharing of innocent blood have found their seats on the continent. Religion, especially Christianity, teaches us that evil spirits have the tendency to torment; harass, destroy and even kill. These evil spirits draw their strength from placing strong faith in them. Evil spirits are call upon openly and libation made to them to employ their blessings. Though Christianity and Islam seek to bring solutions to this menace, their efforts is somewhat thwarted as some Africa religious practices have crept their way into Christianity and Islamic worship. Traditional priests and priestess known as 'Akomfo' are turning into preachers, some of them backing their teachings with the bible. Their worship is nothing more than traditional practices polished to suit modern age. Juju men call themselves 'Mallam' and assist people in getting juju to aid them in life. There is open witchcraft on some parts of the continent. Religion has in some way come to deepen the superstition as critical and scientific or natural thinking have giving way to spirit-way-solution to all problems of life. There is a huge veil of superstition covering the face of the continent. A story was told of a man who went to church and had to mention the name of his god to save him instead of God. The question is what happened? The bench upon which he and other church members sat broke and was falling down and immediately he mentioned the name of the god of the town to save him instead of God. This man is a classic superstitious man who could not control things even at the place where superstition is eschewed.

The numerous innocent bloods which were shed on the continent haunt it every day. Ranging from the tribal wars fought on the continent centuries ago; slave trade to wicked leaders and leaderships which destroyed the life many for no apparent reason. Uganda suffered bloodshed of innocent people; Rwanda suffered the same fate; South Africa during the apartheid; Congo wars killing many innocent people, Angola wars, Liberia war crimes, Central Africa nightmares of instability; Cote d'Ivoire election aftermath; Boko Haram atrocities of Nigeria, Tribal wars and human sacrifice of Ghana and many more. The blood of many dead innocent people continues to cry against the continent. There is a strong believe that Africa is under a huge curse because of these atrocities committed on its soil. This is seen in how the continent continues to suffer and grope in darkness. If a mighty hand had not moved against the continent then how come the continent lacks the ability to utilize its numerous resources blessed with it by nature? How come wickedness continues to prevail across the continent?

The veil of superstition is African's huge burden which continues to constantly draw the continent into dissipation and hopelessness. Our leaders are heartless and self-centered instead of human-centered. Some of them have dead conscience and have contributed largely to the sufferings of their citizens. Some of them employ juju (black magic) to ascend to power and use atrocities to curb their fellow countrymen. Hugely resourced but constantly begging for aid or assistance paint a clear picture of a damned continent. Superstition has robbed the politician from presenting himself a capable individual of leading his or her country; it has also robbed the businessman from generating new ideas as well as working hard to boost his business; the young man from pursuing healthy living but seek after juju for quick money. Superstition has encouraged the religious leader to use black magic to rob the ignorant; it has robbed some religious folks from enlightenment and continues to rob the continent of all good things that man through purpose, commitment and critical thinking or natural thinking could have acquired for himself. Superstition is the king of Africa who sits right in the minds of many people and dictates their pace in life. Superstition will tell you that many sicknesses on the continent of Africa are spirit borne; they were not there until some witches brought them. Think of this: pornography did not start in Africa but it has the highest prevailing sexual transmitted diseases. Africa witches enjoy atrocities as inflict on their very own people sometimes their own relatives. Superstition will tell you many deaths on the continent are triggered by juju, sorcery or witchcraft. Superstition will tell you people are poor in Africa because they are blindfolded or being pursued by evil spirits who will never permit them to come out even if an individual is given $1million. He will squander it and come back to enjoy his poverty. Superstition has prevented many people from coming out from poverty on Africa continent. Superstition has made our leaders heartless and constantly employing black magic in politics to win power rather than presenting themselves as worthy serving citizens. The veil of superstition is so huge that an African dream of deliverance is long fetched. A continent of bloodshed, juju, and witchcraft and wizardly, occultism, ancestral worship, gods and enchantments is full of darkness.

Africa look forward to the time where she will be purged completely from these superstitious stains which has crippled its development and uplifting. Everywhere on the Africa has some level of superstitious stains which continue to darken the minds of people and prevent any critical or natural thinking as well as scientific thinking which is the main force behind the development of many countries of the world.