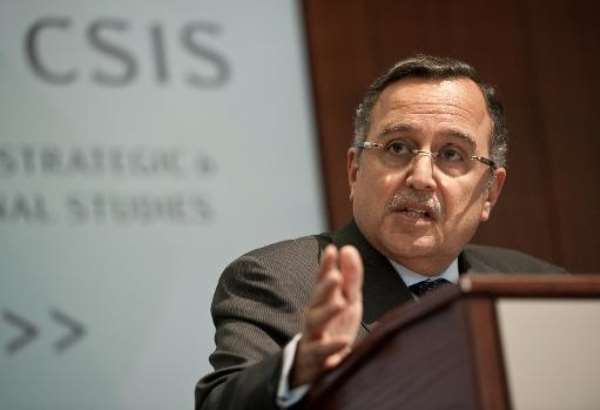 Speaking on the eve of high-level meetings in Washington, Fahmy admitted ties had and may go through "turbulent times" since the 2011 revolution and the army's subsequent ouster of democratically-elected president Mohamed Morsi last year.

As Fahmy addressed the Center for Strategic and International Studies, the White House said it was "deeply troubled" by the court sentencing 683 alleged supporters of Morsi's Muslim Brotherhood to death, including spiritual leader Mohammed Badie.

"Today's verdict, like the one last month, defies even the most basic standards of international justice," the White House said, calling on the court in Minya to reverse its decision.

"These actions will further add to instability, extremism and radicalization," she added.

Fahmy is the highest-level Egyptian official to visit Washington since the army overthrew Morsi in July -- a move that has strained ties with the US.

Washington has called for the military to restore democracy in the key regional ally.

The foreign minister is due to meet with both US Secretary of State John Kerry and Defense Secretary Chuck Hagel on Tuesday, only days after the US administration partially lifted a freeze on some $1.5 billion in mostly military aid to Cairo.

The US has agreed to deliver 10 Apache helicopters for counterterrorism efforts in the unruly Sinai peninsula and some $650 million in military aid, but withheld the rest of the funding until democratic progress is made.

Fahmy said that "the whole of society is going through a transformation... as we build a modern Egypt," pledging to "build a more open society for everyone."

And he suggested the Minya court ruling could yet be overturned, saying "don't jump to conclusions that the case is determined one way or the other, before it is... let the legal process follow through."

He also took issue with what he called the "US narrative" since Morsi's ouster saying Egypt was not just engaged in a political crisis, but in "an existential struggle over the identity of Egypt as a people... and the future of Egypt as a nation."

The minister, a former ambassador to the US, highlighted what he called "a wave of terrorism" that has swept the country since Morsi's overthrow.

"It is in the interests of both countries to renew the unique rationale of the Egypt-US relationship that seems to have gone adrift in years past," Fahmy said.

"In doing so we must both recognize the new realities that we both face. The US must recognize that there is a new Egypt with a vigorous, demanding population, one that will continue to engage the world, but will not reconcile itself to a subordinate role or accept outside pressure."

Even though "the fundamentals of this relationship have been tested, and the confidence has frequently been eroded," Fahmy voiced confidence that ties would emerge much stronger.

Before former leader Hosni Mubarak was toppled by popular protests in 2011, US-Egypt ties had "suffered from complacency and even at points in times stagnation," he said.

"It will require a candid, honest, conceptual conversation between both sides. That conversation will not conclude during this visit, for much dust still has to settle before a dialogue can intensify and come to fruition."

When the US froze most of its aid to Egypt in October, the US administration said it was "recalibrating its assistance," which over the years has been heavily weighted toward the military that buys US-made arms and weaponry.

More talks were needed after last week's announcement of a partial resumption of aid to discuss "other aspects of the aid package that also need to be addressed," Fahmy said.