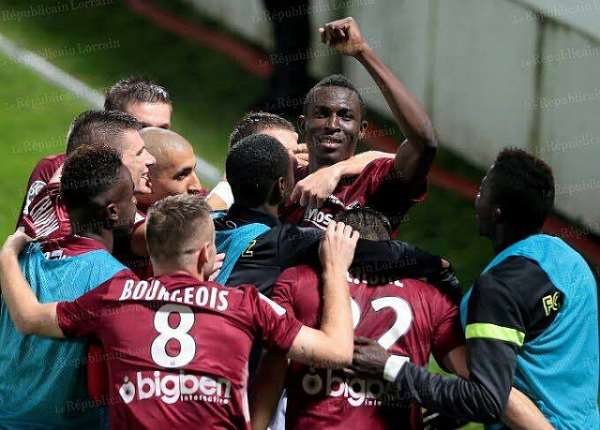 By Akyereko Frimpong Manson
Follow Akyereko on Twitter: @ Akyereko
Ghana youth international Kwame Nsor will play in the French Ligue 1 next season after his FC Metz clinched promotion to Ligue 1 with four matches to spare after a 3-0 victory away to AJ Auxerre on Saturday afternoon.

The crocked former Ghana U17 and U20 striker keenly watched from the screens and cheered on his team-mates when they booked a vital win over Auxerre to seal their fate.

Goals from Gaëtan Bussmann, Yeni Ngbakoto and Diafra Sakho earned Les Grenats all three points at the Stade de l'Abbé-Deschamps to secure a second consecutive promotion and ensure a return to the top tier for the first time since the 2007-08 season.

Nsor returned to Metz from Germany at the start of the season and contributed three goals to their promotion campaign after playing 10 games before being ruled out with a leg problem.

The former Wa All Stars striker took to social media to express his delight after the feat on Saturday.

“Congratulations to my team mates, the technical staff and the fans of this great club for the promotion to Ligue 1,” he updated his Facebook status.

Metz could still win the Ligue 2 if they win any of their last four games left in the season.