SADA mango project: hundreds of acres of plantations wither due to lack of water 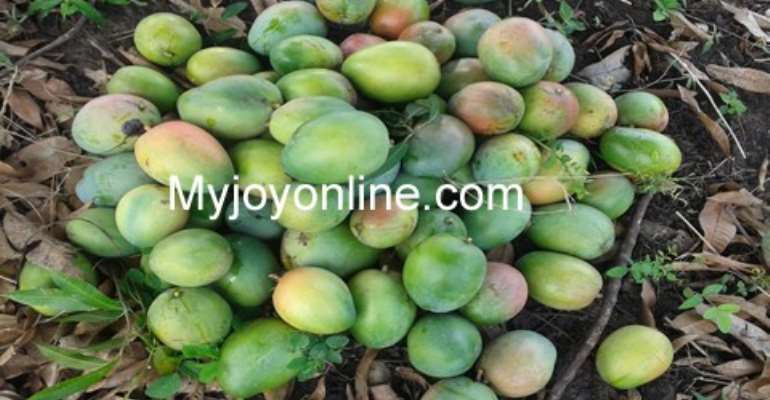 Hopelessness and frustration have taken over the thoughts of some farmers and service providers, who took part in the mango project of the Savannah Accelerated Development Authority (SADA), as their seedlings wither due to lack of water.

The project across the SADA zone was initiated by the authority to improve the area's vegetation cover and provide a source of livelihood for the farmers.

However, SADA's failure to mechanize the boreholes it drilled in the plantations has caused mango trees planted, to wither.

Joy News' Manasseh Azure Awuni, who spent weeks touring the project sites reports that on a hot afternoon, farmers in Kadentwe community in the Krachi West District poured out their problems to a project officer of Richie Plantations Limited.

The company is the service provider contracted by SADA to oversee the implementation of the mango project in Northern Volta.

The Kadentwe community cultivated a total of thirty-five acres, but, with the onset of the dry season, their toil appears to have been wasted as a result of SADA's failure to provide them with mechanized boreholes as promised.

When Joy News visited the plantation, it was realized that about 80% of seedlings planted had withered. Project Manager Kingsley Antobam blamed the situation on the timing of planting the seedlings.

"We planted as late as October and so did not have enough rains. So you can see that most of the plants are not looking too good", Kingsley Antobam intimated.

At Ehiamankyene also in the Krachi West District, a borehole had been drilled on one plantation but was not mechanized. Some farmers, who planted early, have high survival rates but indicated that if they don't get boreholes, not all the seedlings planted will survive the dry season.

The situation on the mango plantations is worse in the Northern Region.

Speaking to Joy News, Ibrahim Iddrisu from Salaga, noted that their problem with the 20-acre mango project has been lack of water.

"No rainfall and no water, when we have already transplanted over 1,000 mango seedlings and they are all there dying", Ibrahim Iddrisu indicated.

He says the high hopes with which he took part in the mango project have been dashed by SADA.

"If you have been given 20 acres of mango seedlings, you can one day be a rich man if the mangoes survive. And look at the situation we are today. The mangoes are not surviving, so our six or seven months sufferings seem to be going useless", Ibrahim Iddrisu complained.

In the Upper West region, Mathew Song-Aabo's Matco Plantation is the service provider for the SADA Mango plantation.

After a tour of some plantation sites under SADA, he told Joy News, he foresees 90% of the seedlings on his plantation drying up because of the Authority's inability to merchandise the boreholes.

"It is really dry, and it gets dry every day. So it can only get worse by the day. By the time the rains set in, I don't think we can expect 10% survival", Mathew Song-Aabo pointed out.

Meanwhile, the former CEO of SADA, Gilbert Iddi stated, "the reason why the mechanization hasn't started for some of them, I can't explain. But it wasn't possible to have mechanized all farms. At the time we were planting, we were convinced that they could be mechanized".

Mr. Iddi conceded, the company contracted to mechanize the boreholes, has defaulted.

When Joy News visited some private mango plantations, including one owned by a service provider, the story was different from the SADA plantations.

This raises the critical question about why SADA is failing in areas, where private individuals and organizations with fewer resources than SADA, have succeeded.