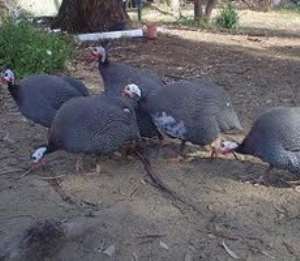 Former Chief Executive of Savannah Accelerated Development Authority (SADA), Gilbert Iddi, says the authority could not ascertain whether or not Asongtaba Cottage Industry paid any money into the guinea fowl joint venture.

SADA claims it entered into a joint venture with Asongtaba Cottage Industry and Exchange Programme to produce and market guinea fowls.

When controversy about the guinea fowl project came up last year, SADA explained the investment was a joint venture in which the private company owned majority shares.

But Gilbert Iddi, who left office almost a year after the joint venture company was formed, says he does not know whether or not Asongtaba Cottage Industry and Exchange Programme contributed any amount.

Joy News' Manasseh Azure Awuni reported that in December 2012, SADA entered into a joint venture with the Asongtaba Cottage and Exchange Programme to commercialize the production of guinea fowls in the SADA Zone.

According to information at the Registrar General's Department, the two directors of the company are former CEO of SADA, Gilbert Seidu Iddi who represented SADA, and Roland Agambire, CEO of the AGAMS Group representing Asongtaba.

For this reason, Asongtaba is the majority shareholder with 56% shares, while SADA owns minority shares of 44%. But Gilbert Iddi says SADA contributed a total of 15 million Ghana Cedis to the joint venture.

Gilbert Iddi was SADA's CEO at the time the joint venture was entered into. He remained the CEO for almost a year afterwards but he says he does not know whether Asongtaba paid their contribution of the 15 million Ghana Cedis.

"Asongtaba also invested 15 million in the project. They were to pay by cash [but] I wouldn't know [whether they paid it or not]", he noted.

The contractors had left the sites at the time of our visits. The only complete structure is the one in the Upper East region. This structure was already in existence before the joint venture company came into being. It was owned and operated by Asongtaba before the company entered into a joint venture with SADA.

Our investigations, however, reveal that the company was paid by GYEEDA to train 2000 youth in guinea fowl rearing before it entered into the joint venture with SADA.

When asked last year about the youth in guinea fowl rearing project under GYEEDA, the executive director of the Asongtaba Cottage Industry and Exchange Programme, Henry Kanga said "they still have not approved on to release funds for the project. So, as and when they do that then we roll it out. So, as we speak, we haven't commenced that project".

However, when confront with a document indicating the payment schedule of 1,745,000 Ghana Cedis cheque in December 24, 2010 by GYEEDA to Asongtaba for 2000 people to be trained in guinea fowl rearing module from 2009-2013, Henry Kanga noted the comapny is ready to commence the training for beneficiaries as soon as the list is made available.

"we don't want to run them at the same time and then we may end up having a little bit of problem. But we want to take time and then implement them one after the other. If we receive the list of beneficiaries right now, we will start in June straight away and I am sure we are going to get the list because they are working on it", he indicated.

Meanwhile, attempts to get Asongtaba to respond whether or not they contributed any amount into the joint venture with SADA has failed.