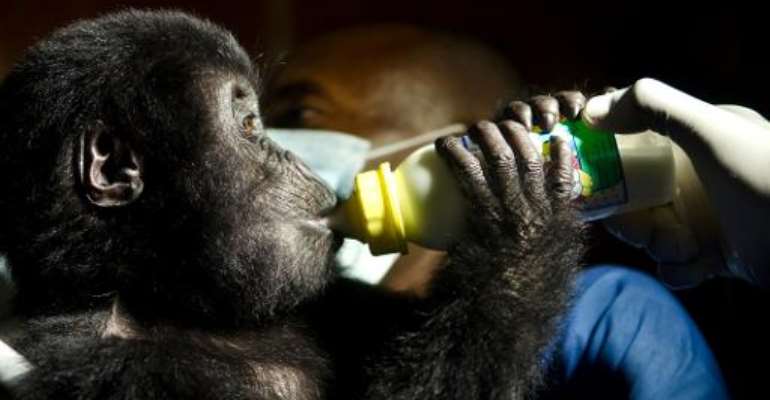 Goma (DR Congo) (AFP) - Environmentalists around the world condemned on Wednesday the shooting of a Belgian conservationist who has struggled to protect Africa's mountain gorillas in the war-torn Democratic Republic of Congo.

Emmanuel de Merode, director of the Virunga National Park in the DR Congo's war scarred North Kivu province, was attacked on Tuesday as he travelled alone by jeep from the regional capital Goma to a nearby nature conservation centre.

"This is the first time the director de Merode has been directly attacked. We don't yet know the motive for this attack," Norbert Mushenzi, the director's assistant, told AFP.

A Belgian lawmaker said de Merode was attacked after filing a report into the actions of a British oil company, SOCO International, which had sought to prospect in an area overlapping the park.

In 2010 SOCO International won a government contract to jointly prospect for oil on a concession overlapping the park's territory, but Kinshasa later suspended the permit under international pressure.

De Merode, who is around 40, was reportedly rescued by an army patrol and rushed to the Heal Africa hospital in Goma where he underwent surgery to remove bullets.

"He was shot in the stomach and the thorax. He had surgery and is still in intensive care, and according to the surgeon, so far there is hope," hospital spokesman Ferdinand Mugisho told AFP.

North Kivu province has been ravaged by successive conflicts for more than 20 years.

The reserve, which covers 800,000 hectares (two million acres) of land on the border with Uganda and Rwanda, has attained worldwide renown for its rare and endangered mountain gorillas.

The attackers did not steal anything from de Merode.

A group of North Kivu environmentalists condemned the attack, which they said was aimed at "discouraging community development and conservation efforts".

The provincial governor of North Kivu, where Goma is located, visited de Merode in hospital on Wednesday.

"He is lucid, he is talking, and he thanked the army for rescuing him, as well as the doctors who saved him," Julien Paluku told AFP.

Created in 1925 in the far east of what was then the Belgian Congo, the Virunga park has been declared an "endangered" part of the global heritage by UNESCO.

Poachers and logging teams have damaged the reserve, as elsewhere in Africa, but the park is also criss-crossed by rival armed groups and soldiers, while local people have taken up illegal residence.

The quest for oil is the latest threat to Africa's most venerable wildlife reserve.

WWF head of conservation Lasse Gustavsson said de Merode was a "dedicated conservationist" who put his life on the line every day to protect the park and the people who depended on it for their livelihoods.

"I know how much Emmanuel loves this park. He continues to be a source of inspiration to those around him and I wish him a swift recovery."