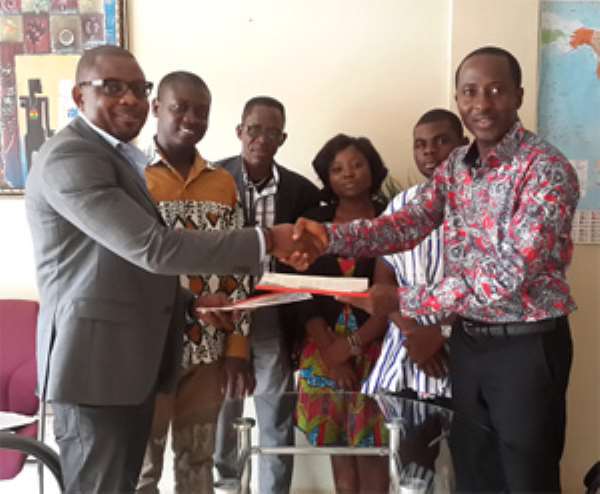 OSEI-KUSI Foundation, an NGO based in Accra  and Selfless 4 Africa, also a United States- based NGO, last month signed a Memorandum of Understanding (MoU) to implement an award scheme to encourage the spirit of volunteerism and community service among students in tertiary institutions in the country.

The Executive President of the Foundation, Mr. Osei Kusi, said the scheme was to encourage young people to cultivate the spirit of volunteerism, community service and patriotism.

He also indicated that the Foundation was committed to making the Ghanaian youth more resourceful, focused and committed to community service through the organization's training modules.

The President further outlined the programmes to include investing in young people through mentoring, coaching, rural missions and scholarships.

Mr. Osei-Kusi explained that the award scheme would task students in tertiary institutions throughout the country to select a deprived community, engage in a research on it to come up with interventions that would lead to improving the lives of the people in that community.

He added that winning proposals would receive grants up to GH¢9,000         (GH¢6, 500 to implement the community project and GH¢2,500 for winner's own use.), adding that they would receive copies of books authored by the President, Mr. Kofi Osei-Kusi.

The executive member of Selfless4Africa, Mr. Ernest Otumi, reiterated the importance of community service project in the development of an individual and nation.

He posited that the 21st Century youth must be trained to be selfless, innovative and have passion for serving their nation.

He was happy that Selfless4Africa had tasked itself to empower the youth to affect the lives of the vulnerable in society.

The President of the National Union of Ghana Students (NUGS), Mr. Samuel Binfoh Dankwa and Mr. Paul Worlanyo Adanu, Local NUGS President of the Kwame Nkrumah University of Science and Technology (KNUST), who lauded the initiative, also commended both NGOs for the intervention.

According to them, NUGS would not just be a mouthpiece for Ghanaian students, but also advance their interest through initiatives like these.