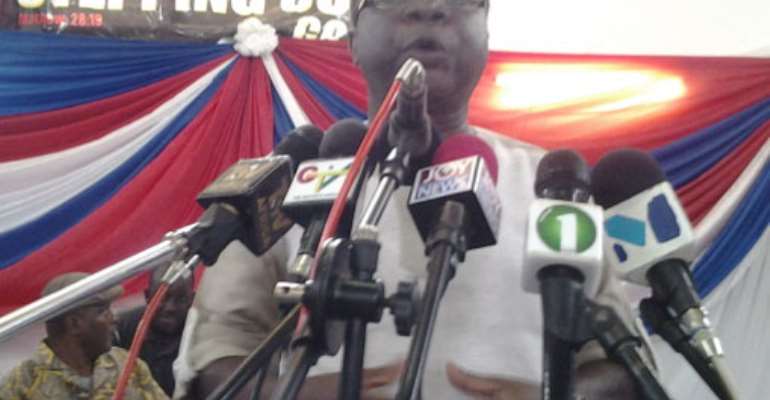 According to him, the current NDC government is made up of a bunch of incompetent people who do not have the clue to end the country's myriad problems.

Mr. Blay said there was a clear indication that the NDC government, led by President John Dramani Mahama, had failed the people of Ghana and must therefore be replaced with a really competent administration.

The aspiring national vice chairman was speaking at a meeting with NPP delegates from about 14 constituencies in the Western Region in the run-up to the party's National Delegates' Congress   slated for Tamale on April 12, 2014, at the weekend.

The former Member of Parliament for Ellembelle and a native of Eikwe (in the region) was given a rousing welcome by the delegates who described the astute lawyer as 'a home boy'.

The delegates jubilantly received the former First Deputy Speaker of Ghana's Parliament and assured him of their total support.

Mr. Blay indicated that the current NDC government had mismanaged the country's economy to the extent that if care was not taken, the country would not be able to pay its workers in three to four months' time adding, 'This country does not deserve that.'

He continued, 'NDC is messing up our country. Recently, some banks in the country revealed that our economy is in doldrums and that if we are not careful the country will come to a standstill.'

NPP constituency chairmen endorsing Freddie Blay
To this end, the NPP vice chairman aspirant called on the rank and file of the party to close their ranks and remain a united force to boot the NDC out of power come the next general elections.

'I know the NPP is now ready to go the extra mile for Ghanaians to see the back of President Mahama and his NDC government in 2016. But before that, the NPP should organize itself well. One of the steps is to go to Tamale to complete our relationship in terms of party organization,' he urged.

According to him, the strong desire to wrest power from the NDC motivated him to join the vice chairmanship race of the NPP.

He noted that the NPP was the only political party that could salvage Ghana from the current economic hardship, in that when it was in power from 2001 to 2008, the party was able to transform the economy from a HIPC (Highly Indebted Poor Country) situation to a lower middle income status.

'It is our responsibility to knock off the NDC. I am ready to be a volunteer soldier in the army of the NPP to fight to take power from the current government,' he said amidst cheers.

Mr. Freddie Blay stressed that he was a team player, who would assist the National Chairman to build an effective party when elected as first vice-chairman.

'I will be humble and always keep in touch with NPP members in the Western and Central Regions to encourage them so that they will be willing to work hard to ensure its victory,' he promised.

WR NPP Endorsement
The various constituency chairmen later declared their support for Mr. Freddie Blay, in his bid to become the first vice-chairman.

'Mr. Blay can easily mobilize support for the party in the Western and the Central Regions to enable the party win more seats and popular votes to wrest power from the NDC in the 2016 general elections,' Nii Ardy stated.