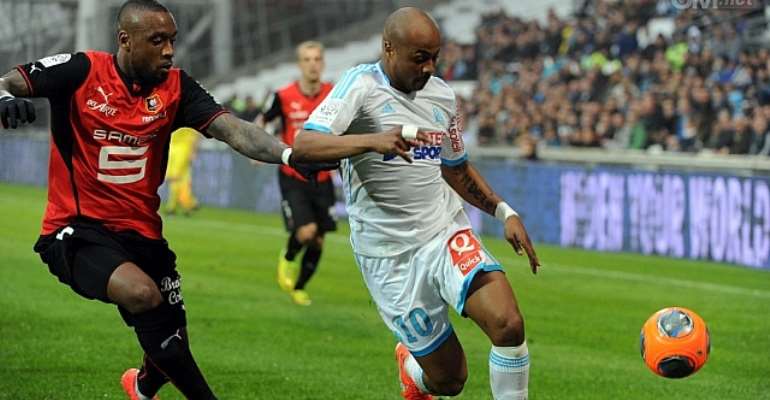 Marseille went into the tie at the Stade Velodrome with a five-match winless run but they ended the streak thanks to the 24-year-old's brilliance as he more than doubled his season's tally by scoring thrice before expectant home fans.

Andre began his incredible night by springing the defence to latch onto a Lucas Mendes ball over the top, he was the picture of composure as he calmly lobbed the on-rushing Guillermo Ochoa with his third of the season and register the opener for Les Olympians.

The Black Stars winger definitely wanted more on the night as he was without a goal since the week 9 of the French top-flight and he tested the visitors' keeper with a cracking drive in the 16th minute.

But he was unable to register a goal until the hour mark when he rose well to nod a Dimitir Payet pin-point cross from the right.

Gadji Tallo halved for the visitors almost immediately after Ayew's second when he produced a cool near-post finish to burry Mehdi Mostefa's blocked shot home in the 61st minute.

Tallo's strike lifted the spirit of Ajaccio but Ayew dashed any further hopes of staging a comeback when he irresistibly finished off a Brice Dja Djédjé. The Liverpool-target confidently shot the ball past the Ajaccio keeper to kill off the game with 14 minutes of regular time remaining.

Ayew's hat-trick on Friday night mark his second career hat-trick – his first career hat-trick came in July 2011 when he got on the scoresheet thrice for Marseille in their 5-4 Super Cup victory over Lille at the Grand Stade de Tange.