As Rwanda marks genocide, no justice for DR Congo massacres 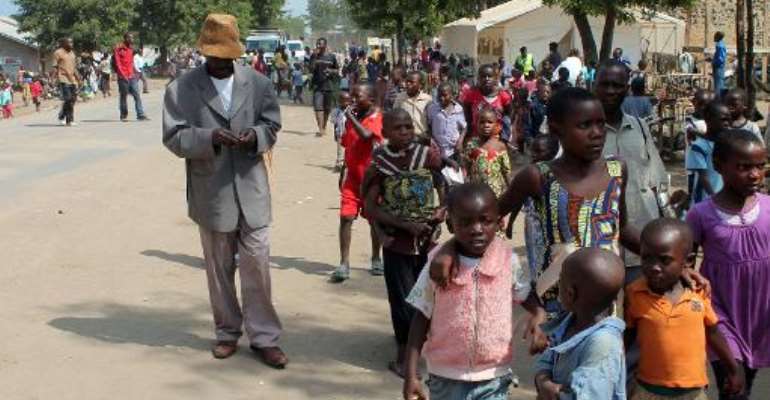 Children leave after the Sunday mass in Kiwanja, 70 km from the eastern Democratic Republic of Congo city of Goma, on March 9, 2014. By Alain Wandimoyi (AFP/File)

Rutshuru (DR Congo) (AFP) - Twenty years after the genocide of Rwanda's Tutsi minority, the massacres of Hutu civilians who fled across the border into the DR Congo remain a taboo subject in Kigali.

In DR Congo's restive east, however, the memories are painfully acute, of families rounded up and murdered, bodies dumped in mass graves, pregnant women disembowelled.

The Tutsi-led Rwandan government sees as tantamount to negationism any suggestion that the victims of genocide were themselves responsible for mass ethnic killings in 1996-97.

But Roberto Garreton of Chile, the first to investigate the slaughter on behalf of the United Nations in April 1997, says he concluded fairly quickly that around 150,000 people had been slain on Congolese soil.

The killings are blamed on forces of the post-genocide government in Kigali who backed a rebel movement led by Laurent-Desire Kabila, the late father of current DR Congo President Joseph Kabila.

"There were many clues showing that the goal was to exterminate those who committed the genocide" against the Tutsis, Garreton told AFP by telephone from Santiago.

But, he added: "It wasn't possible to say with certainty that there was a genocide," that is, the wilful extermination of an ethnic group.

Here in Rutshuru in the country's east, a Congolese Hutu told AFP: "They killed many! They set up barricades and if you had a Hutu name they took you away (and) they killed you!"

A woman who gave her name only as Chiza said: "I saw a pregnant woman whose stomach had been cut open, and the baby was beside her, still attached by the umbilical cord. The woman's belly was full of flies."

Located some 50 kilometres (30 miles) from the regional mining hub Goma, Rutshuru and its surrounding area was a major target of killings in 1996.

That was when Laurent-Desire Kabila kicked off his rebellion in North and South Kivu provinces in what was then Zaire.

Kabila's rebel ADFL army, which would succeed in overthrowing the dictator Mobutu Sese Seko in 1997, was backed by Rwandan troops who poured across the border, where hundreds of thousands of Rwandan Hutu refugees had fled in 1994.

Hiding among them were genocide perpetrators, the so-called Interahamwe militiamen, members of the former Rwandan military and other civilians who took an active part in mass killings.

At the same time the Rwandan Patriotic Front, the minority Tutsi force that halted the genocide in Rwanda and took power in Kigali, mounted an operation to halt cross-border incursions into Rwanda by the Interahamwe.

When Kabila's rebellion took off, the Rwandan soldiers who flooded into Zaire did not simply track down the Interahamwe; according to many residents, they targeted Rwandan as well as Congolese Hutus indiscriminately, including civilians -- men, women, old and young alike.

The soldiers from Kigali are accused of having staged phoney reconciliation meetings, only to rob people and then kill them or recruit them as cannon fodder to fight for Kabila.

"A pastor told his flock that if they stayed together in a house Rwandan soldiers would do nothing. But they burned down the house," recalls one resident.

Later, around 1,500 families at a camp for displaced Hutus in Nyongera, just north of Rutshuru "were all killed," said Chiza, who belongs to a women's association.

A Congolese Hutu civil servant recalled how, in late 1996, several dozen people were rounded up one evening at a local official's house.

"They took groups of five or 10 people, tied them up, brought them here, and killed them with a hoe."

The man, who requested anonymity, pointed to a spot where the executions allegedly took place and where the bodies were thrown -- now covered with weeds.

Another said he escaped a "planned massacre" at the end of 1996 in Rwanguba, east of Rutshuru.

"One morning, when we came back, we found those who didn't escape: they were bound, and their brains had been hacked out with a hatchet," he said.

Hutus were allegedly hunted down elsewhere as Kabila's AFDL fighters advanced on Kinshasa, some 1,000 kilometres (600 miles) to the west.

Hundreds of thousands of Hutus fled ever deeper into the DR Congo for weeks, and mass graves can be found along their route.

The UN probe, which faced continual obstruction from Kinshasa, took years before finally concluding in 2010 that "the apparent systematic and widespread attacks" perpetrated by the AFDL and Rwandan soldiers "reveal a number of inculpatory elements that, if proven before a competent court, could be characterised as crimes of genocide."

But no prosecutions resulted from the probe, and nearly 20 years later, those responsible for the crimes have not been brought to justice.