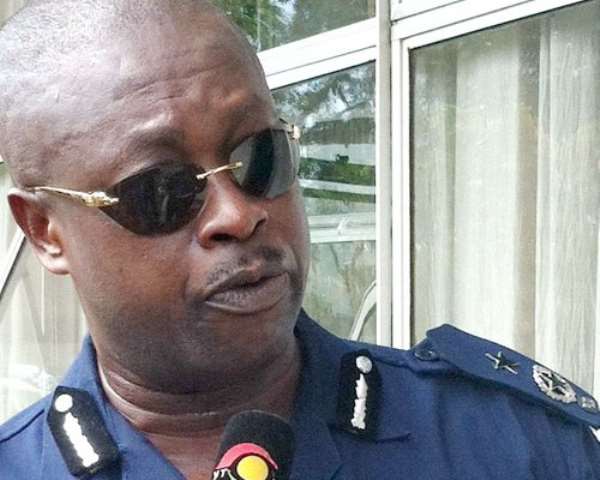 DCOP Kofi Boakye
SIX PERSONS, including Nana Ahenkan and a 24-year-old spiritualist, Chana Nelson, are in the grip of the police for allegedly trying to kill a 17-year-old girl (name withheld) for voodoo commonly known as 'juju.'

Nana Ahenkan, a resident of Ejisu Manhyia, reportedly lured the girl, who is his friend, to accompany him to Atia, near Ejisu, to collect his money from a friend, a source said.

Unknown to the innocent girl, Nana Ahenkan was taking her to a shrine at Atia where he (Nana Akenkan) and four other male friends had visited, to sacrifice her for 'juju' that would enable them to get rich quick.

Nana Ahenkan and the girl met the spiritualist and the four other male friends of his who are part of the money-making syndicate at the shrine at 5:00pm on Saturday.

The spiritualist reportedly ordered Nana Ahenkan to buy a razor blade which he used to make multiple cuts on Ahenkan's body after which he used a white cloth to wipe the blood and put in a calabash filled with concoction.

Later on, the spiritualist cut the girl several times with the razor blade and used another white cloth to clean the oozing blood, which he placed in a different calabash also filled with concoction.

After this, Nana Ahenkan and the four other boys left the shrine, leaving the girl and the spiritualist alone. The spiritualist then engaged the girl in a conversation during which he learnt that she was related to someone who had helped him before.

Around 12 midnight, the same day, the spiritualist took the girl to a cemetery for some rituals, and they were met at the cemetery by Nana Ahenkan and the other four boys.

The spiritualist reportedly lit different candles and placed them on a tomb as he made incantations in the presence of all the people including the girl. He then ordered them to follow him to his shrine for continuation of the rituals.

On the way to the shrine, one of the boys, Evans, assured the spiritualist that they would buy a Land Rover vehicle for him and he would also buy a four wheel drive car for himself after all the sacrifices had been done.

Upon arrival at the shrine, the spiritualist entered a room with the lady and ordered Ahenkan and his friends to go into another room, noting that he was about to perform the remaining rites with the girl.

The spiritualist reportedly told the girl that he would give a coin to her to swallow and she would vomit money afterwards. The girl sensed danger but did not utter a word.

She run for some meters before she saw a house, entered and reported to its inhabitants that the spiritualist and five other boys tried to kill her for 'juju'.

The girl's relatives were informed about the issue and the matter was reported to the police who arrested Ahenkan, the spiritualist and the other four boys, the source hinted.

He said the police are still investigating the matter, alleging that irate youth of Atia, upon learning about the issue, visited the shrine of the spiritualist to destroy everything on sight.