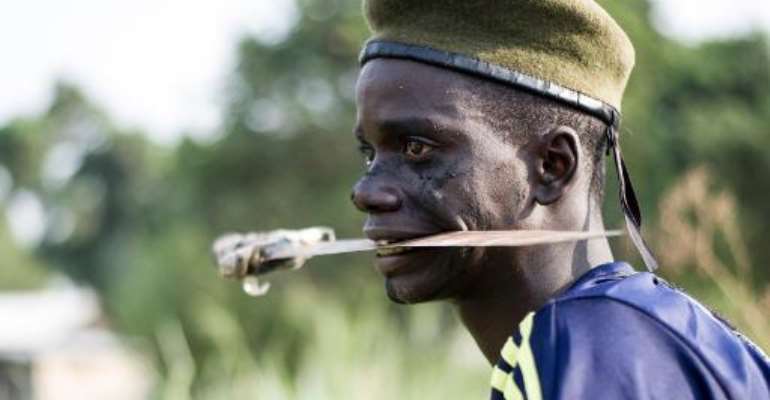 A file photo taken on February 24, 2014 shows a member of the mainly Christian "anti-balaka" (anti-machete) militia holding a blade in his mouth as he trains in the Boeing neighbourhood of Bangui, Central African Republic. By Fred Dufour (AFP/File)

Brussels (AFP) - African and European leaders hold crisis talks on the escalating violence in the Central African Republic on Wednesday as some 80 nations gather in Brussels for a key summit.

Conflict, illegal migration and fears of more jihadist turmoil look set to dominate the mammoth gathering held a day after the European Union announced the launch of a rare military mission to restore peace in the Central African Republic (CAR), scene of some of the worst violence seen in years on the continent.

The force of up to 1,000 troops, dubbed EUFOR-RCA, the EU's first major ground operation in six years, is to bolster French and African peacekeepers striving to end months of escalating Christian-Muslim violence.

As leaders of Africe and Europe head into Brussels for the summit, 13 EU nations, including Britain and Germany, and 12 African states, including Chad and Gabon, gather for crisis talks on the Central African Republic (CAR) at 1030 GMT on CAR with UN Secretary General Ban Ki-moon.

Leaders of the 54-nation African Union and 28-member European bloc then meet for the EU-Africa summit at 1230 GMT, which runs to Thursday.

- A partnership of equals -

More than three years after now defunct Libyan leader Moamer Khadafi hosted the last EU-Africa summit in Tripoli -- dedicated largely to his own glory -- post-colonial and trade tensions, as well as worries over China's influence, are lingering.

The seizure of Khadafi's massive stocks of arms by mercenaries after his ouster is held responsible in part for jihadist-linked unrest that since has unravelled across vast swathes of Africa, notably in Mali and Niger.

The EU has waded in to help UN and African peacekeepers restore peace there as well as in Somalia.

"I hope the summit will mark a new stage in our relationship with Africa," said EU council president Herman Van Rompuy. It was time for a "shift from development cooperation to a partnership of equals with trade and investment playing a key role," he added.

An overwhelming majority of leaders from both continents are attending, though a notable last-minute stay-away is Zimbabwe's Robert Mugabe, boycotting in protest at an EU refusal to temporarily suspend a visa ban on his wife to allow her to also come to Brussels.

The EU relaxed sanctions against Zimbabwe earlier this year but maintained a travel ban against 90-year-old Mugabe and his wife for another year while agreeing the Zimbabwe president leader could travel to international forums.

Also absent will be Sudan's President Omar al-Bashir, wanted by the International Criminal Court on genocide charges relating to Darfur -- another irritant in Europe-Africa relations with some Africans complaining it is up to Africans to judge Africans.

Trade has been another cause of tension as the two continue to struggle to agree trade deals -- economic partnership agreements (EPA) -- giving Africa better access to EU markets while lifting tariffs in Africa, seen as a vital source of income to governments and a protection to its fledgling industry.

Meanwhile China has increased its penetration of Africa, overtaking Europe as the main partner in 2009, while India, Brazil, Turkey and South Korea are all looking for opportunities as stability and growth improve.

"In just a few years Africa has become an attractive bride that can choose among several candidates," said analyst Geert Laporte of the European Centre for Development Policy Management. But Europe "right now does not have a lot of sex appeal."

The EU continues to be Africa's largest donor but now is looking to switch from its historic role of providing assistance to a more dynamic one of investor.

"The need for investment in Africa is so huge that the more investment coming, the better," EU development commissioner Ndris Piebalgs told AFP.

Though in the last five years Africa's economy has grown faster than Asia's, the continent remains mired in poverty with millions jobless and seeking to reach Europe's shores in hopes of a better future.

A key issue in consequence at the summit will be illegal migration as the EU offers to open its borders to legal migrants, students and business people in exchange for greater control by Africans of their own borders.