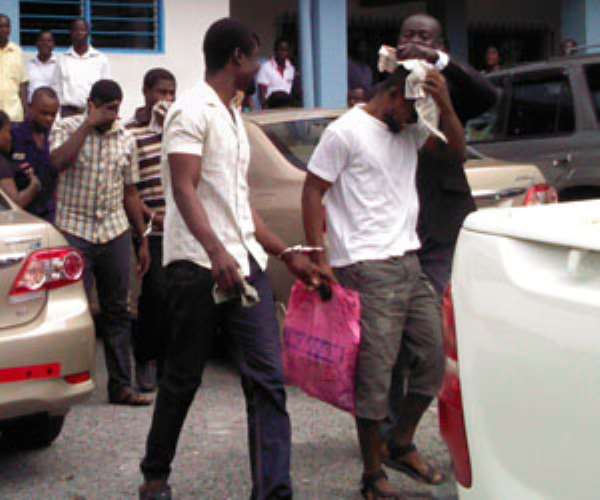 The suspects leaving the court room
Drama unfolded at a Koforidua Circuit Court over a knapsack which was an exhibit in the ongoing trial of seven persons for the various roles they played in several robbery and rape cases in the New Juaben Municipality.

The knapsack which belonged to Godbless Mensah, a teacher and a victim in one of the cases which occurred at Atekyem, a Koforidua suburb on December 22, 2013, became a subject of amusement when Samuel Kwame Akwetey struggled to make the court believe it was not for Godbless as claimed.

'Can he tell me where and how much he bought the bag? This bag belongs to my child,' Akwetey argued.

But Godbless said the bag found in Akwetey's room was his. It was that same knapsack he used as his “computer bag” which the robbers had carried away with their booty.

Godbless Mensah told the court presided over by Ebenezer Osei Darko on Thursday that he went out of his room at about 12:30am to urinate when he saw a hooded man holding a machete at the entrance of his house, but the man instantly took to his heels.

He followed him to the back of the house where another hooded man was waiting.

Soon after, they chased him to his house. Samuel Akwetey who had a gun in addition to the machete pointed the pistol at him and his friend who had then woken up from his sleep.

Akwetey then asked if they knew what he was holding. He told them, “This is a gun,” threatening, “if you do not bring all your money, I will shoot you.”

The victims decided to enter the room and shut the door but they were unsuccessful as the robbers overpowered them.

Godbless said he engaged Isaac Agormor (the short one) in a struggle in an attempt to prevent him from slashing him. However, in the ensuring struggle, Akwetey came to the rescue of his accomplice by hitting him with the blunt side of the machete resulting in the removal of his hood.

According to Godbless, immediately Akwetey realized his hood was removed, he dashed out, with Agormor following him.

He said he was afraid so he stood aloof begging  Akwetey to spare the life of Godbless whom he said received a cut on his right thumb after over 20 lashes with the machete.

He said he had tried impressing upon Akwetey to stop beating Godbless seeing they could hurt him but got some five lashes himself.

He said moments after the robbers had left they realized their laptops and phones were taken away including the tell-tale knapsack which he said was big enough to carry four laptops.

In all they took one Hp laptop, a Toshiba and Apple laptops, one iPad, one Nokia and one iten android phones.

Agormor and Akwetey put up a drama to indicate their innocence in the case but the two victims insisted they were their attackers.

The robbers, according to the two witnesses, had jerked the burglar proof of the window, cut the mesh and removed three louvre blades to gain access to the room.

The witnesses were led in evidence by Nana Gyankuma Sakyi.

The court ordered that all accused persons connected to the case be remanded into prison custody in separate cells.

This was because a senior state attorney, Priscilla Dikro had prayed the court to order the separation of the accused persons in custody, since an inmate had reportedly assaulted Samuel Kwame Akwetey while in police custody.

Chaos during inauguration of Parliament unjustifiable – Bagb...
3 minutes ago

Bagbin declares NPP as Majority with Fomena MP
3 minutes ago