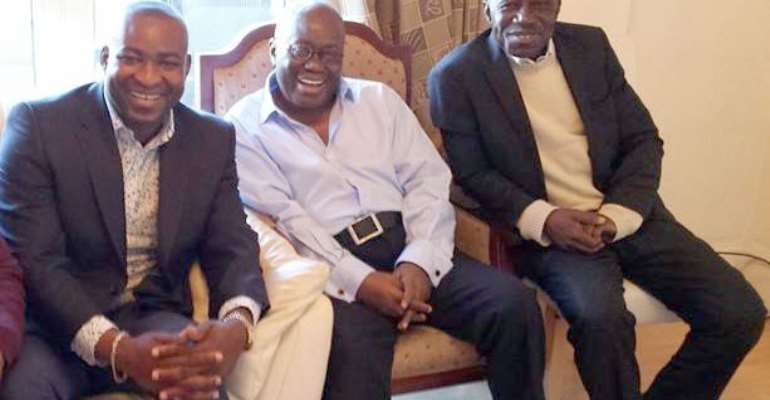 From Left: Bernard Antwi-Boasiako aka Wontumi with Nana Akuffo-Addo and Kwame Osei Prempeh

THERE ARE strong indications that Nana Addo Dankwa Akufo-Addo will contest the presidential election for the third-time running on the ticket of the New Patriotic Party (NPP) in 2016.

The Ashanti Regional Chairman of the NPP, Bernard Antwi-Boasiako (aka 'Wontumi'), stated categorically that Nana Akufo-Addo would contest for the presidency.

'Nana Addo Dankwa Akufo-Addo will lead the NPP as the flagbearer for the third-time running during the upcoming 2016 presidential elections,' Chairman Wontumi, who recently visited the 2012 presidential candidate of the NPP in London stressed, during an interview with DAILY GUIDE.

There were media reports that Nana Addo was hanging his political boots for Dr. Mahamudu Bawumia, his running mate, in the two previous elections, but the reports had been rubbished by his aides.

Snippets of information emanating from the corridors of the largest opposition political party lately indicated that Nana Akufo-Addo, who contested for the presidency in 2008 and 2012, would contest for the top seat once more.

Though Nana Akufo-Addo had not stated whether he would contest for the seat again or not, latest happenings and utterances by several top personalities in the party pointed to the fact that there was some credibility in the reports making the rounds.

Nana Addo is expected back in the country early March when he would throw more light on his political future.

Wontumi's categorical statement even fuelled the speculations further, as he told DAILY GUIDE that there was no way Nana Akufo-Addo's name and portrait would be missing on the ballot papers for the 2016 presidential polls.

The Ashanti Regional NPP chairman said the party's grass root members across the country were calling on Nana Addo to lead the party once more as the flagbearer.

He said although Nana Akufo-Addo was outside the country currently, he was aware of the numerous cries and appeals by the party's supporters for him to lead the NPP again for victory.

Wontumi stated that he would be surprised if Nana turned his back on the millions of NPP faithful that were crying for him to lead the party to victory in the 2016 elections.

He said although Nana Akufo-Addo had not confirmed to him that he would vie for the presidential seat again, he was sure that the 2012 flagbearer would eventually bow to the intense pressure from the NPP faithful and contest for the presidency once again.

The NPP top man said most of the NPP faithful who were craving for Nana to contest the presidency, were of the opinion that the NPP had duly marketed Nana Akufo-Addo to the electorate already.

They therefore believed that the NPP's work would be lessened in terms of marketing a flagbearer whose name and portrait had appeared on the ballot papers two successive times already.

According to him, the NPP supporters were of the opinion that Nana Akufo-Addo, aside his campaign message of transforming the country, would also attract sympathy votes in 2016 to win the elections for the NPP.

Active Politics
On Friday, Nana Akufo-Addo's Office in Accra issued a statement denying that he had bowed out of politics.

Kow Essuman, an aide to the NPP 2012 presidential candidate, said Nana was not in a hurry to quit politics, as it was being speculated by some self-styled media analysts.

Lawyer Essuman dismissed claims that the NPP leader had bowed out of the upcoming flagbearership contest of the party, as suggested by the Al Hajj, a pro-NDC tabloid, on Thursday.

The paper claimed, 'Nana Addo Dankwa Akufo-Addo, who is cooling off in his 'hideout' in far-away UK, has finally thrown in the towel on his widely rumoured third term bid for the presidency due to old age and health.'

However, the statement indicated, 'Nana Akufo-Addo made no such decision' insisting that 'the story is entirely false.'

Mr. Essuman insisted, 'There is nothing to be worried about' and that 'at the right time, he will let the good people of Ghana know what his decision is with regard to what he wants to do in Ghanaian politics.'