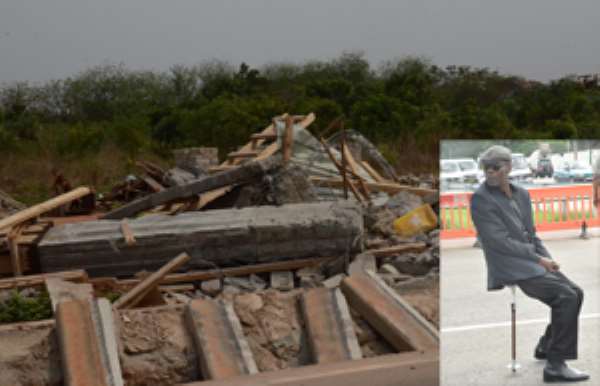 National security operatives were in the news yesterday and expectedly, for negative reasons. We have lost count of the times these operatives have undertaken brawny and crude missions largely inconsistent with the rule of law and acceptable practices.

From demolitions at Nman Dzorn to Adjei Kojo national security operatives masking their faces and donning military uniforms have been active much to the embarrassment of the law enforcement agents and indeed cherishers of democracy and the rule of law.

Their midnight demolition at Nman Dzorn recently was most appalling: it was a vintage national security demolition bereft of a court order; impunity which has become their hallmark.

Regrettably Mr. Larry Gbevlo-Lartey, the national security coordinator considers such show of brawniness as consistent with national security practices. In other dispensations such as USA, Britain and even Nigeria national security operatives are hardly in the news although they constantly perform their constitutionally mandated roles.

The dawn demolition of the tollbooth at the University of Ghana, Legon yesterday at the behest of the National Security Coordinator - the latest in the series of crazy demolitions - their discredit to state the least, was most unprofessional, crude and a mockery of democracy.

Interestingly, vintage Gbevlo Lartey, full of hubris, spoke to the issue on the airwaves in a manner which lacked remorse; he sounded as though he is an authority onto himself and answerable to none.

The decent thing to do under the circumstances, as presented by the tollbooth at Legon, was for the coordinator to engage with the university authorities on what in his estimation infringed upon state security.

Unfortunately, he decided on the unilateral demolition option and as though that was not enough infamy he served notice that when the situation presents itself again he would repeat the action.

We are saddened that Ghana is gradually losing most of the attributes of civilized and democratic societies: impunity and disregard for the rule of law are beginning to reign supreme as though a playback of the AFRC days has been ordered.

Mr. President would have to step in here and call the national security coordinator to order, lest the embarrassing situations continue. It is a deviation from the norm when national security issues, something kept away from the airwaves become features of facebook communications between the coordinator and his friends on the social network.

We do not seek to comment on the merit or otherwise of the siting of the tollbooth and even the collection of the tolls from the public: we are concerned about the brigand conduct of the national security operatives which impugns on the image of the country as a whole.

National security management is about coordinating the work of the various agencies in the areas of law enforcement, defence and such areas which have direct bearing on the nation's security.

We do not dispute the fact that food security, among others, can have adverse implications on state security but discreet management of these is the hallmark of the professionals worth their salt.

We have had enough of this war simulation drills from the demolition demons in a civilian setting.