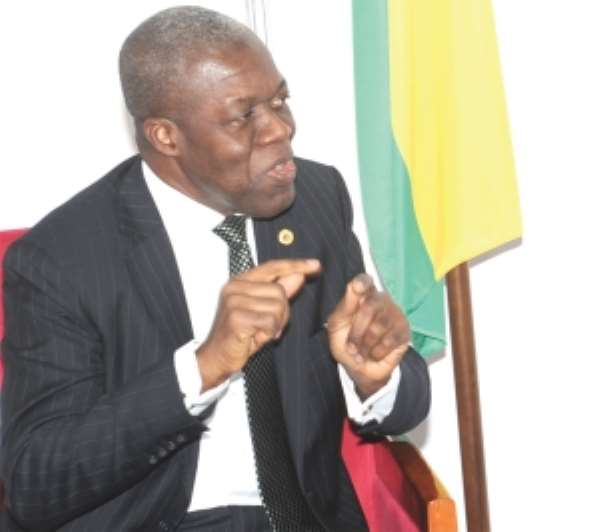 Vice-President Kwesi Amissah-Arthur has charged regional ministers to provide early warning signals to the government of the existence or likelihood of any security threats in their respective regions.

He said as chairmen of the regional security councils (REGSECs), it was their responsibility to ensure that the government was abreast of the security situation in their respective regions.

The Vice-President made the call when he addressed the Second Conference of Regional Ministers at the Busua Beach Resort in the Ahanta West District in the Western Region Thursday.

The theme for the three-day conference, which is also being attended by regional co-ordinating directors and metropolitan, municipal and district chief executives (MMDCEs), is, ''Redefining the Role of the Regional Level in the Governance Architecture''.

Mr Amissah-Arthur said media reports on the security situation in the country sometimes created the impression of serious insecurity, adding, “If it is not residents demonstrating over the poor state of their roads, then it is a Member of Parliament (MP) issuing a 'shoot-to-kill' order to his constituents against Fulani herdsmen.''

He said many of those forms of agitation could be ameliorated if the regional co-ordinating councils (RCCs) took pre-emptive measures rather than waited for the agitation to develop before they reacted.

He expressed the hope that in their session with the National Security Co-ordinator, they would discuss how that aspect of their mandate could be implemented more effectively.

The Vice-President reminded the regional ministers that they were the frontline implementers of the NDC's ''Better Ghana Agenda” and recalled that in the 2013 State of the Nation Address, President John Mahama had made certain pronouncements whose implementation required the active participation of regional ministers.

Also attending the conference are some MPs, traditional leaders, heads of departments, NDC supporters, assembly members, as well as representatives of other political parties.

Professor Kwamena Ahwoi,  an expert in local governance, will take the conference through the draft consolidated Local Government Bill and the role assigned to the regional level in governance.

Mr Akwasi Oppong-Fosu, the Minister of Local Government and Rural Development (MLGRD), said a lot more was still being done to deepen the decentralisation process and the local governance system in the country.

Among them, he said, were the implementation of the reviewed decentralisation policy framework and action plan, the urban development policy to tackle the numerous urban challenges and the street-naming and property-addressing system in the MMDAs. Local Government Bill

In his welcoming address, the Western Regional Minister, Mr E.K.T. Addo, said out of 1,642 kilometres of trunk road network in the region, 401km, including theTarkwa-Bogoso-Ayamfuri road, was at various levels of construction at a cost of GH¢735 million.

He said 679km stretch of feeder roads was at different levels of construction and rehabilitation, at an estimated cost of GH¢131 million, adding that in all the government was investing GH¢866 million in the region in respect of roads.

The Omanhene of the Sefwi Chiraano Traditional Area, Okogyeman Gyampah III, who chaired the opening ceremony, said good governance entailed the efficient and effective use of resources.