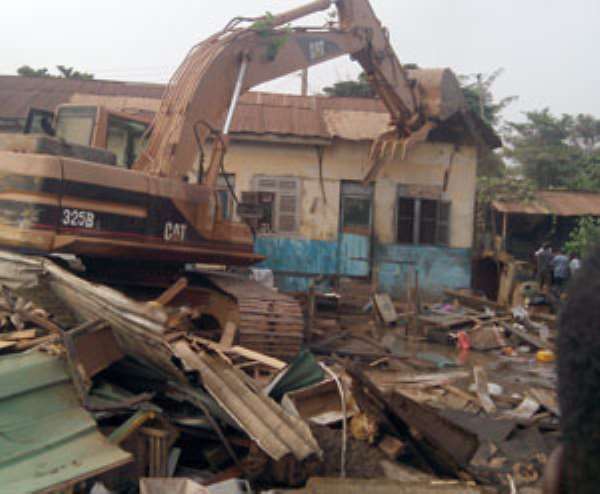 The supposed owners of the new site at Kansaworodo claimed the said land was not properly acquired by the assembly.

They have therefore vowed to eject any mechanic who would set foot on the new site.

The 22-acre land at Tanokrom, near the Jubilee Park, which was used by the artisans, has been sold to a South African investor, Western Development Consortium Limited (WDCL) that intends to develop it into a shopping mall and other ventures.

The STMA, in collaboration with the South African private investor, purchased a 58-acre land to develop it into a modern Light Industrial enclave for the artisans.

However, the artisans maintained that the new site allocated to them had not been properly developed and so they would not relocate.

Police and military at the scene
As part of measures to clear the land for the construction of the shopping mall, the contractor allegedly sought a court order to demolish structures belonging to mechanics and artisans operating at Tanokrom Kokompe last week Friday.

The demolition exercise was supervised by a joint police and military team.

Family Members Fume
However, the paper gathered that the family members, who own about 49.55 acres out of the total 58 acres of land at Kansaworodo, have expressed dissatisfaction with the conduct of the assembly.

The family members called on STMA and the contractor to do the right thing before relocating the artisans to the new site.

Effia MP Meets Family
The Member of Parliament (MP) for Effia, Joseph Cudjoe last Monday held a meeting with one Abusuapanyin Kwamena Nyamekye, who claimed to be the head of the clan that owns a large portion of the 58-acre land at Kansaworodo.

At the meeting, the Abusuapanyin alleged that the assembly had not approach them to acquire the land and that it was the contractor for the shopping mall project, one Peter Obosu, who visited them and expressed interest in the land.

The only thing the contractor did was 'the knocking' with some drinks, the Abusuapanyin said, adding that 'they have not acquired the land and so the artisans cannot be moved to the new area.'

Mechanics Lament
According to the mechanics, the relocation to the new site would collapse their businesses and prevent the employment of hundreds of youth.

The Tanokrom Zonal Chairman, Kingsford Eshun, indicated that due to the hilly nature of the new site, it would be impossible for the artisans to work effectively from there.

He also noted that the borehole and the 20-seater toilet facility constructed at the new site were not enough to cater for about 2,000 mechanics.

He also said that due to a distance of about 14km between the new site and Takoradi, it would be impossible for them to work effectively.

MCE Reacts
The Chief Executive of STMA, Capt (Rtd) Anthony Cudjoe however insisted that the 58-acre land at Kansaworodo had been properly acquired.

He explained that the current site was not earmarked for light industrial purposes and that it was the Lands Commission that sold the area to the South African private investor.

According to the chief executive, the assembly, in collaboration with the private South African investor, had provided amenities at the new site to help the mechanics to operate effectively.

The Contractor
Later in an interview, Peter Kow Obosu, a contractor with the Peekob Company Limited, constructing the shopping mall, said the 58-acre enclave at Kansaworado, a suburb of Takoradi, was ready for operations.

He said there were amenities such as water, electricity, toilet facilities, among others, at the place to enhance their operations.

Chaos during inauguration of Parliament unjustifiable – Bagb...
50 minutes ago

Bagbin declares NPP as Majority with Fomena MP
50 minutes ago