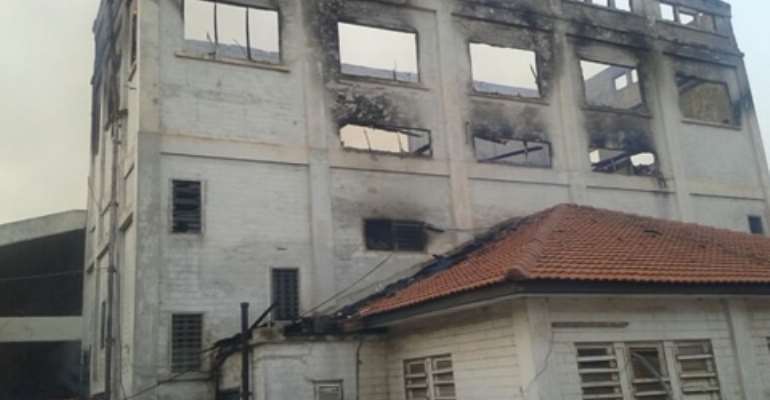 Major sections of the Old Parliament House near the Art Centre and opposite the Kwame Nkrumah Mausoleum in Accra has been destroyed by fire.

Myjoyonline.com's Edwin Appiah who is on the ground says firefighters are having a hectic time to bring the raging blaze under total control, and stopped it from spreading to other buildings.

Even though the fire seems to have been doused, there is still thick smoke bellowing from the main chamber.

Edwin reports that the building in which the Sole Commissioner, Justie Yaw Appau, is inquiring Judgement Debt Payments and other related matters has been completed burned.

Also the Finance, PR and Research departments of the Commissioner for Human Rights and Administrative Justice (CHRAJ) were not spared.

CHRAJ and the office of the Sole Commissioner are all housed in the building.

The fire fighting efforts by personnel of the Fire Service was greatly hampered because cars parked in the compound of the building complex could not be moved.

Edwin reports that the keys to the cars were in one of the rooms that were on fire.

The fire which started at 3:45 am Thursday dawn destroyed many documents and everything in the affected buildings.

The security personnel on duty, Isaac Morgan, told Myjoyonline.com that when the fire was detected, he made frantic calls to the fire service but had no response. He said he had to drive there in person to inform them about the unfortunate incident which they responded within 10 minutes to battle the fire.

He was optimistic that the Commission would have made alternative arrangements for a new location for the Judgment Debt hearings by January 16, 2014 when sitting resumes.

In a related development, a shoeshine boy has been arrested for stealing a DSTV digibox while helping staff of CHRAJ with rescue efforts.