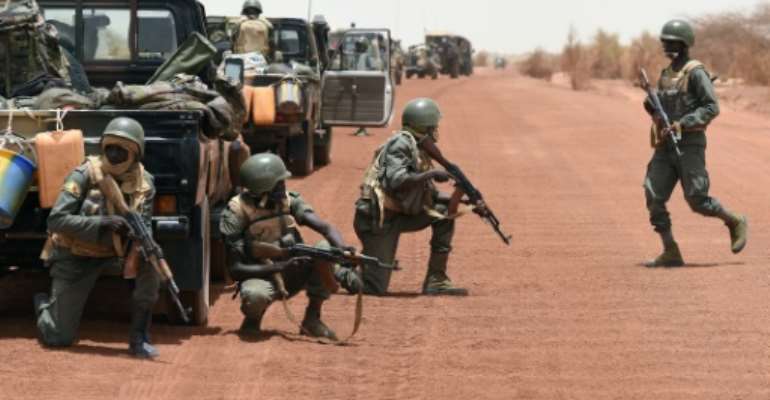 Malian soldiers on June 2, 2015 securing the pist between Goundam and Timbuktu, an area which has seen a strong resurgence of violence in the past few days. By Phillippe Desmazes (AFP/File)

Keita had been scheduled to leave on Tuesday to attend ceremonies on Thursday to inaugurate an expansion of the Suez Canal.

The president "will not be going to Egypt for domestic security reasons," an aide to Keita said, citing "the current situation."

"President IBK has cancelled the trip he was scheduled to make to Egypt this morning," the presidency said on Twitter, referring to Keita by his initials.

On Monday, 11 soldiers were killed in a "terrorist" attack on their camp in northern Mali's Timbuktu region, a government statement said.

The assault was claimed by Al-Qaeda's front group in the region.

On Saturday, two soldiers were killed and four were wounded in an ambush near Nampala, close to the Mauritanian border.

Ten Malian soldiers were killed by jihadists in an assault on their garrison base in Nampala in January in a raid also claimed by Al-Qaeda in the Islamic Maghreb (AQIM).

Jihadist attacks are normally confined to Mali's restive northern desert region but areas bordering Mauritania have been targeted since the start of the year, and southern settlements more recently.

A move south towards the capital by the extremists, who imposed a brutal version of Islamic sharia law on inhabitants, prompted Mali's former colonial power, France, to intervene in January 2013, pounding their positions in the north.