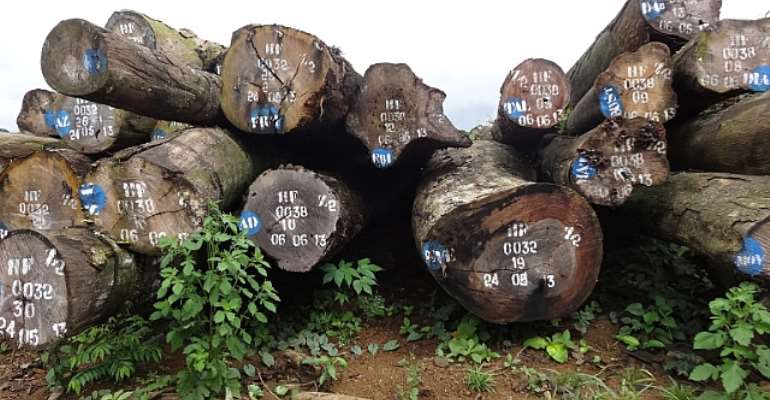 The American company claims it was going to clear the forests for oil palm plantations. The concessions are in Mundemba, Toko and Nguti Subdivisions of the South West Region of Cameroon. They are situated between the Korup national Park, Bayang-Mbo Wildlife Sanctuary, Rumpi Mountain Forest Reserve, Bakossi mountains and Nta-ali forest reserve. This is a very fragile ecological zone of High Conservation value (HCV).

SG-SOC will pay FCFA 198,430,000 (305,359 Euro) into the Cameroon treasury as land revenue for the three years. The company is also expected to invest 400 million Euro in Cameroon. Environmentalists say the destruction resulting from this project will be more than 1000 percent over the expected benefits.

SG-SOC had been involved in illegal logging in Cameroon from 2009. It ignored Cameroon Land Tenure Laws and did not seek the Free Prior and Informed Consent (FPIC) of the communities concerned with the land concession. It has also indicated that it was not going to conform to the Round Table for Sustainable Palm Oil (RSPO). SGSOC withdrew from the RSPO (world's largest annual meeting of oil palm industry, environmentalists, human rights advocates, and, most importantly, community members) in protest over the platform's criticisms of the companies non-adherence to best practices .

Before the suspension of the company in April 2013, mapping of land for the claimed concession was done unilaterally by SGSOC without the participation of local communities. Local populations woke up to see strangers planting pillars and beacons in their farms and forests. Some of these forests are sacred sites of worship to the communities.

After an establishment convention signed in 2009 between the former Minister of Plan and Regional Development (MINPAT) and SGSOC, managers of the company claimed they had been awarded 73,086 hectares to develop for 99 years. They also claimed the government of Cameroon had given them the green light to go ahead without consulting local communities.

Opposition and protest from the local communities was quashed with intimidation, torture and corruption. Many local opponents of project were intimidated with some arrested and detained arbitrarily.

Even without the much needed Presidential Decree, SGSOC had erected itself into an authority influencing and corrupting the local administrations to arrest and torture opponents.

Nature Cameroon, a local NGO based in Nguti and opposed to clearing of forests around Nguti was banned indefinitely by the Divisional Officer (DO) of Nguti for organizing village tours to educate and sensitize the local communities about their rights to their land and resources. Nassako Bessingi of Struggle to Economize Future Environment (SEFE) was arrested and detained in Mundemba. Oakland Institute, Greenpeace International, WWF, CED, RELUFA, and other international NGOs were declared persona non grata by SGSOC and Chief Dr. Atem Ebako of Talangaye.

Chief Atem Ebako was in a celebratory mood when he took my call this morning. He announced that celebrations were at fever pitch in his village, Talangaye. Talangaye hosts one of the nurseries and plantations of SGSOC.

As Community Base Officer (CBO) of SGSOC in Talangaye, Chief Dr Atem Ebako personally offered his village lands to SGSOC. He was personal liaison between the company and Talangaye, and his role was to make the company acceptable to his community through unorthodox means. CBOs are accused of using corrupt practices to enlist local support for SGSOC.

In the words of Chief Atem Ebako, the Management of SGSOC represented by Patrick Jones, its GM, is still to react to the good news. “I am still to contact the GM of the company, who is resident in Cameroon, to examine the bright prospects for the company, in the days ahead.”

The bright days ahead for SGSOC in Cameroon may not be that bright as NGOs and some local communities are already scandalized by the presidential decree. They see it as authority the President of Cameroon was giving to the company to clear forests and destroy important ecosystems of universal importance.

According to Center for Environment and Development (CED) and network to fight hunger in Cameroon, RELUFA, the purported oil palm company has not respected the FPIC and has not changed from the bad practices it was accused of. SGSOC is still alleged to have bought its way to the desks of President Paul Biya by corrupting various administrators along the way. Nature Cameroon was suspended in Nguti based on the complaints from SGSOC and its supporters in Talangaye.

The opposition has moved to a different dimension with minority groups saying President Biya of the Republic of Cameroon is a colonialist who has no business auctioning Southern Cameroons lands.

Supporters of the UNO-State of Cameroon, a group claiming the self-determination of the former Southern and Northern Cameroons say “…at a time when the momentum is for the independence of the colonies from the Federation of Nigeria and the Republic of Cameroon, Paul Biya cannot start 1884-style partitioning of the territory.”

UNO-State of Cameroon is made up of the South West and North West Regions in the present Republic of Cameroon; and the Taraba, Borno and Adamawa States in the Federation of Nigeria.

Local communities, totally opposed to SGSOC, say they are afraid to have such a company, which had shown initial bad faith, at their doorsteps. They say they are afraid the company will use the Presidential Decree for 19,843 hectares as authority to expand freely as they wished.

Economists see the land deal as bad economic wisdom. They claim local farmers will be dispossessed of land to expand their cocoa farms from which they make more income. Presently, a local farmer makes an annual income of more than 1000 Euro a year from a hectare of cocoa. Local people also harvest and gather non timber forest products like the African bush mango, jangsa, pepper, and other spices and exotic vegetables from their forests.

Timber exploitation companies are also at a loss as the concession crosses their logging permits. They are afraid SGSOC will empty the timber in the forest and leave. They claim they pay more than the paltry 10 Euro the company was going to pay per hectare as land revenue. They also harvest only economic value timber leaving other species standing. On the contrary the oil palm business is a monoculture concern which will clear and wipe out all other species leaving only oil palms.

Being essentially primary forest, the concession area comprises some of the prized economic value timber in Cameroon and the Congo Basin. SGSOC is said to be interested in taking out these logs for free while pretending to be an oil palm company. They point to the thousands of economic value timber already logged illegally, stamped and piled in the plantation ready for sale by SGSOC.

A lot of pressure will be brought to bear on the wildlife which would take refuge in the few wildlife sanctuaries in the area, since their habitats will be destroyed by forest clearing. Animals hunted for bush meat by local communities will escape to the sanctuaries attracting the ever hungry hunters there.

SGSOC is not good business for the State of Cameroon as the 2009 Establishment Convention grants them total exoneration from import and export duties and other taxes for 99 years.

Cameroon's legislators, both senators and parliamentarians who were just (s) elected in the last months are just settling in their seats. They have not been presented the proposed revised convention for debate and adoption in the houses as expected by the law. Even the competent administrations and ministries have not synchronized their strategies to control the excesses and abuses of the company.

It is not certain the Wall Street investors, who had shown interest in the purported 73,086 hectares SGSOC claimed it had been awarded in 2009 will still be interested in doing business with the company. Investors are shocked by the lies and bad practices of the former management of SGSOC and will not be so willing to invest in the company.

Ghana must not be caught pants down in future, let's find av...
33 minutes ago

Sputnik V saga: ‘Why should I be a subject of ridicule for b...
40 minutes ago