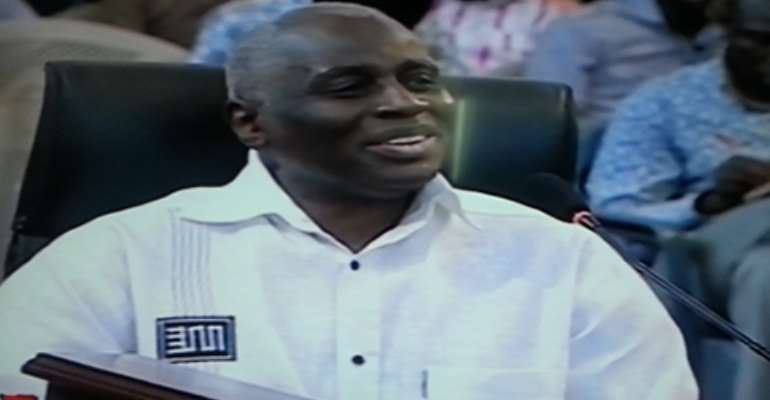 Former Boss of GNPC, Tsatsu Tsikata has taken his turn at the Judgment Debt sittings to answer questions surrounding to the sale of the Drill Ship D511.

Follow the live text below:
10:45: Tsatsu took the oath
Asked to narrate what he knew about SG debt,
Until the end of his tenure there was neither a judgement nor debt against GNPC much less against govt of Ghana as at December 2000.

Important to underline period he was the CEO, GNPC was a corporate body that can sue and be sued, was sued as statutory body by SG in a case brought against them in London.

GNPC contested the liability that was claimed in that suit, and contracted a legal firm, Bindman and Partners, and  entered appearance on behalf of the corporation including a counter claim. This was done with the approval and knowledge of the board.

40 million dollars was the claim from SG, which arose from a series of transactions in 96/7.

Took pain to study the claim, based on advice, an expert witness was hired on behalf of GNPC – counterclaim related to the fact that what the SG acted as advisors and acted negligently in their duty of care to the corporation, so we do not accept liability.

After SG brought the suit, GNPC called for further and better particulars.

But the bank blanked out certain portions of the document they sent to them – GNPC regarded those portions as relevant, and counsel insisted the blank portion should be made known to them, but SG resisted that attempt. They also resisted a request by GNPC lawyers of tape recordings of various conversations in the course of transaction which SG had in their custody, according to normal practice.

Lawyers then decided to apply to the courts for the tapes to be made available including disclosing those blanked out – process went back and forth for sometimes, but some discussions were initiated in response to a possible settlement.

The inital claim by SG was $40m but were prepared to settle for 20m but GNPC didn't accept. - clear indication that SG was not holding on to the claim they initially made.

In the course of the transactions certain payments were made to GNPC, Tsikata recalled. GNPC should be willing to reimburse, the payment made to them, so lawyers authorised to continue the negotiation, it came down to 12 million dollars.

His hand over note ready by January 2001.
Akufo-Addo, then Attorney General, called him somewhere February 2001 that he wanted to know the status of the case. He wrote a brief bout it which he set out in details the whole processes so far including the fact that lawyers insisted that certain documents should be made available without parts being blanked out. He informed Nana that SG had denied offering any kind of advice in these matters, which was contradictory. GNPC has evidence that SG lied, he said.

SG initiated some steps to have the drill ship brought into USA while working in Mexico, but were not successful.

Also highlighted in his brief was the fact that that SG were willing to settle less than what they were claiming.

Asked if he kept a copy of the brief, he said the computer he worked with was stolen from his house under strange circumstance.

It is public knowledge, at a point in August Kan Dapaah, Energy Minister, he said, launched an attack on him and made a number of allegations, including receiving monies from societe Generale and also taken some documents belonging to GNPC away. September 6, 2001 held a press conference upon his return to the country and responded – he denied the allegations. The reality of the matter is that Dapaah rather indicated that SG has no basis against the GNPC nor the state – more reasons government shouldn't claim liability because Dapaah claimed the money was given to him, Tsikata.

Prior history of SG seeking mighty hand of government to get what they thought they were due, but the government at the time took a clear position that, the case was purely a corporate affair because government was not involved.

Government, under Kufuor, was prevailed upon to accept what SG is claiming. He felt the Kufuor government rather adopted the position of SG and not GNPC which for that reason were contesting the SG claim in court.

He also received invitation from Energy minister for a brief which he obliged after the minister was sworn in, and indicated his readiness to assist – but the next time I heard from him was when he had his press conference.

He felt there should have been a more definite position in favour of GNPC.

Structure of GNPC has its own way of conducting business including the way its accounts were created and monitored.

Section 19 of GNPC law allows creation of foreign exchange accounts to receive all monies received in abroad; Bank of Ghana was to monitor the accounts.

He also recalled that after his press conference Kwabena Agyapong, the press aide to President Kufuor, said the Energy Minister was away would respond on his return but no response.

Tsikata says he finds it strange that the GNPC's lawyers - Bindman and Partners - were asked to step aside, noting that when Kan Dapaah appeared before the Commission yesterday he was only repeating claims by SG and not GNPC.

Lawyer for Commission: Sokpor asks if the drill ship had been collateralised for a loan

Tsikata says the transaction with Societe General had no security involved. It was resolved that the matter be settled through negotiation. In the course of negotiation, they indicated that the drill ship will give them comfort if it was used as mortgage. In the context of that, a mortgage document was prepared. That document had no indication of any amount due and payable. It was only a matter of good faith that the document was prepared and that GNPC was in the process negotiating what amount needed to be paid to Societe.

Tsikata says they had an approach from a Norwegian firm who wanted to buy the drill ship. At that time it had a significant market value. But GNPC made it clear it was not ready to sell. The plan was not to sell it but to enter into a joint partnership with private investors.

At the time i left GNPC the drill ship was in good condition and had a good deal of market value. I do not know how the ship was valued by the Kufuor administration but under a distressed sale situation in which there was a default judgement against GNPC, there obviously could not have been a good value for the ship.

Justice Yaw Apau asks that
There was a law in 1993 which stated that 32 companies should be converted into a limited liability company almost all were converted but GNPC was not why is that?

Tsikata said in the 90s the corporation engaged in many discussions with Finance Ministry and a state enterprise responsible for the process. One critical issue they faced was that to undertake its activities, thus commercialised them, GNPC has to be capitalised as a company. Don't know what happened to those discussions since he left office, since the next government had its own view about the issue. For instance the NPP government set up a committee to reduce the workforce at GNPC – all kinds of reviews on what GNPC should be doing and not.

Commissioner read a mandatory section in the Statutory Corporation Act which is against a direct interference of government in the affairs of GNPC, questioning why the GNPC drillship was sold by a deputy minister.

Tsikata noted that GNPC was a corporate body regulated by board of directors appointed by government. There were board of directors at the time the ship was sold, he thinks. The Board has a three year tenure and members would have to continue, by law, until a substantive board is appointed.

He said with the functions of the board effectively usurped by someone with the powers from the president, without knowledge about the drillship, he doesn't think the best value was obtained.

He reiterated that legal firms, Bindman and Partners, negotiating with SG and the amount they were claiming kept coming down. Why would you set aside the firm and go for another legal firm – it is not clear to me why that choice instead of the choice of the board, he wonders.

Commissioner: Why in the case of GNPC the minister and deputy should involved in the affairs of GNPC instead of following what the law says. We should respect the rule of law and allow institutions to operate. Order from above not good for rule of law, he laments.

Tsatsu: that is a serious problem especially when it comes to GNPC operating in a specialised way. He says he does not believe the best value can be obtained by someone who knew little about the values of the ship and what it does.

There should be a reporting back to the GNPC after the power of attorney was given to the deputy minister, K.T. Hammond, he suggested.

SG, he says, took advantage of change in government to secure something they don't deserve: unfortunate realities that can be seen in the GNPC situation. The default judgement could be a collusion.

Denies running a one-man show at GNPC, no basis for the allegations, he says he could not order about people he claimed were experienced in their various fields. He rather listened as a leader. What he is proud of after 12 years with the corporation is that GNPC had talented people and had the honour to work with dedicated and exciting people.

GNPC did not have liabilities but have assets as well, he remakred.  For instance, Westel, created by GNPC, was sold for 120 million dollars. Company with that kind of assets portfolio cannot be rubbished. GNPC had shares in Ecobank, Total etc. Effort to rubbish GNPC was baseless. He hopes to address issues concerning assets of GNPC which were not talked about when people talked about liabilities.

Willing and open for anyone who will contest the statement he has made to cross examine him, but this was declined by the Commissioner who explained that Mr Tsikata was not on trial.

Commission's lawyer wanted to know how much was in GNPC's foreign exchange account when he left office.  He said he cannot recall exactly the amount because there were several accounts.

The Lawyer further asked whether he was surprised that another account was created, he replied, certainly I would be surprised.

The Lawyer asked if he had an idea how much was given to SG: he says he has no idea but knew the discussion was about 12 million when he left office.

Denied K.T. Hammond claims that Bindman were human rights lawyers. He says that is totally false, its a reputable firm, its lead barrister was a well-known commercial lawyer in UK, such claims are ignorant statements.