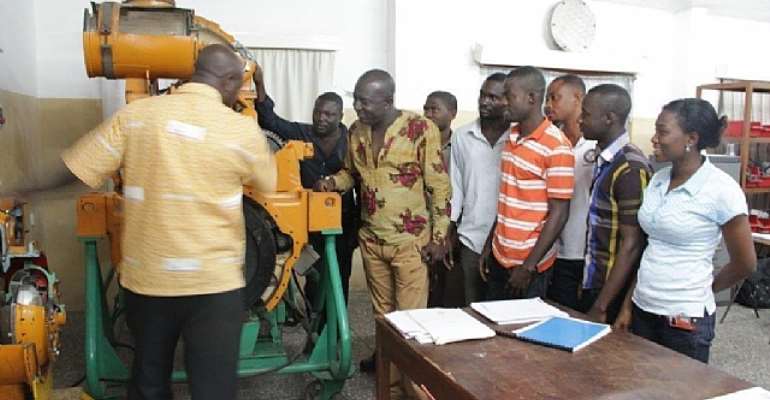 The Member of Parliament for Obuasi East, Hon. Edward Ennin has commended the corporate citizenship programmes and the overall social investments of AngloGold Ashanti in Obuasi as one of the best worthy of emulation by both foreign and local companies operating in the country.

"In spite of the challenges that AngloGold Ashanti is going through, I' m highly impressed with your sustainability and community relations projects that you have planned to lift up the social and economic development of the people in the Obuasi and surrounding communities where you operate", Hon. Ennin said during a courtesy call on the Managing Director of Obuasi at the weekend.

The MP was particularly interested in education projects that were being sponsored by the AngloGold Ashanti Community Trust Fund, with a seed money of $2.9 million. The Fund last week announced that it is funding the construction of teachers quarters and four schools in Nyamebekyere in Amansie Central and Ayease, Ahasongyiwodie, and Jimisokrakaba in the Obuasi Municipal Assembly, which the last communities are located in the Obuasi West constituency. Mr Ennin said the construction of more schools in the remote and depraved communities by the company will open up more opportunities for parents to ensure the education of their children with relative ease as their kids will no longer have to travel long distances to and from school, adding "building quarters for teachers will encourage regular interaction between the teachers and parents on the performance of their wards".

The trust fund was solely financed by Obuasi AngloGold Ashanti; it has donated 15 - Seater Toyota buses to eight senior secondary schools in Adansi West and East, Amansie Central and West Districts as well as Obuasi Municipal Assembly in addition to 120 laptop computers, which went to both first and second cycle institutions. Besides the Ghana Stock Exchange - listed gold miner directly built and donated last year a $35,000 IT center to the Obuasi Municipal Administration to facilitate IUT education in the municipality last year.

Commending the company was the soft side of his visit to the mine. On the issue of illegal mining ,the MP directed his venom against galamsey operators and patrons who are still operating on the company's concession , saying "all progressives business and social partners" should coalesce with AngloGold Ashanti to fight against the security and safety menace posed by illegal miners in the municipality. He wants the police, chiefs, traders, youth associations and others to join hands to uproot illegal mining from Obuasi.

Earlier in an overview presentation to the Obuasi East MP, the Managing Director of the mine said the operation is undergoing painful but necessary transformation to ensure it in on firm foundation to produces quality ounces to enable the company generate profit and positive cash flow for the mutual benefit of both shareholders and stakeholders. " Illegal mining is real in Obuasi and they're not only threatening employees and their dependents but are undermining our safety and operational plans to increase production and reduce costs on the mine".

Mr Enyan appealed to stakeholders to educate their family members involved in illegal mining to stop their activities, warning that the company has legitimate right to protect its assets.