By CENTRE FOR CIVIC EDUCATION (a.k.a Transition Monitoring Group)
Listen to article

2) As a result, TMG will be able to provide real time, representative and statistically valid information on the conduct of the Election Day processes – arrival of staff and materials, setup of the polling unit, accreditation of voters, voting itself and counting of ballot papers – both what goes well and any possible areas of concern.

4) TMG's 600 stationary observers will be deployed in pairs to a representative random sample of 300 polling stations located in all 21 local government areas (LGAs) in proportion to the number of polling units in each LGA, according to well established and widely accepted statistical principles (see attached table).

5) At sampled polling units, TMG observers will closely watch the process throughout Election Day and complete a checklist with 36 detailed questions about the process, from the time of arrival of INEC materials to the posting of the official results, INEC Form EC.8A (see TMG Observer Checklist).

6) Throughout Election Day, TMG observers are expected to send to an information centre located in Abuja a total of 3,600 text messages containing 21,600 individual pieces of information about the conduct of Election Day processes (see point 2).

7) All 633 TMG supervisors and observers will also text in critical incidents about serious problems that may occur on Election Day. TMG mobile supervisors will send in reports from anywhere in their assigned LGA (see TMG Critical Incident Form).

8) TMG mobile supervisors will also be deployed to the 21 INEC LGA Collation Centres to record and transmit the official INEC LGA-level results.

Selection of sampled polling stations was done in a two-step process:

At each polling unit, TMG will deploy two observers for a total of 600 observers.

9) Reports from all TMG mobile supervisors and stationary observers will be sent via coded text message and processed by a computer database for real-time information on the electoral process.

10) Elections ultimately belong to the people. TMG's observation effort will provide independent, non-partisan representative information on the quality of the process and the accuracy of the official results so that people can determine if the conduct of the Anambra gubernatorial election meets their expectations. 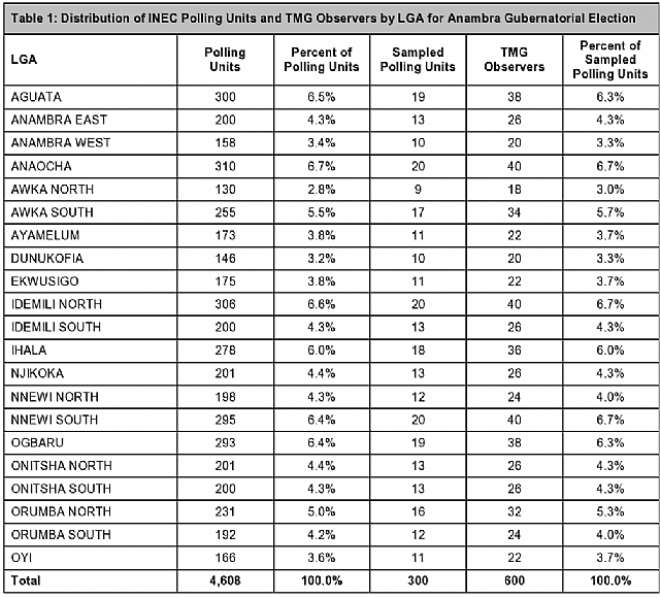