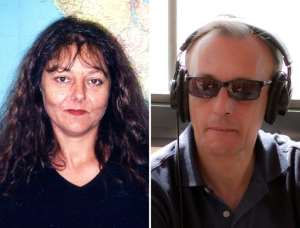 Bamako (AFP) - Two French radio journalists were found dead after being kidnapped by armed men in north Mali in what President Francois Hollande called a "despicable" act as he ordered an emergency ministers meeting for Sunday.

Ghislaine Dupont and Claude Verlon of Radio France International (RFI) had travelled Saturday to the northern city of Kidal to interview a spokesman for the Tuareg separatist group the National Movement for the Liberation of Azawad (MNLA), and were abducted outside his home, according to their employer.

RFI said MNLA spokesman Ambery Ag Rhissa said he heard commotion outside and "saw the kidnappers put the journalists into a beige 4X4".

Men in turbans and speaking the Tuareg language of Tamashek "ordered Mr Ag Rhissa to get back inside and forced the journalists' driver to lie down", RFI said, adding that he had heard Verlon and Dupont resist and protest their abduction.

"This was the last time that the journalists were seen alive," said Marie-Christine Saragosse, CEO of France Media Monde, which owns RFI.

Hollande expressed "his indignation over this despicable act", said a statement from his office.

The French leader, who sent troops to Mali in January to oust Islamist rebels from the north, has called a meeting of his ministers for Sunday to establish "jointly with Malian authorities and UN forces, the conditions of the killings".

Hollande and Malian leader Ibrahim Boubacar Keita spoke over the telephone, the French president's office said, reaffirming their determination "to relentlessly pursue the fight against terrorist groups that are present in northern Mali".

The exact circumstances of the journalists' deaths are not yet known.

"The bodies of the two journalists were found by the patrol about 12 kilometres (seven miles) east of Kidal on the ground near a vehicle that had stopped," Jaron said, adding it was about two hours after their abduction.

Dupont, 57, was an African affairs specialist who had spent 27 years covering the continent since joining RFI in 1986, including stints in Ethiopia, Sudan and 10 years in the Democratic Republic of Congo.

"She always wanted to dig, dig deeper and she shared this passion with us and always encouraged us to go further," her colleague Nicolas Champeaux said.

RFI said Verlon, 55, who had been at the station since 1982, was a seasoned journalist who was "used to difficult terrain across the world".

A spokesman for European foreign policy chief Catherine Ashton said there was "great sadness" on hearing news of the incident.

The spokesman added the deaths were a "heinous crime" which must not go "unpunished".

The press group Reporters without Borders called the killings "an unspeakable and revolting act".

Moussa Ag Assarid, the MNLA's spokesman in Europe, told the French i-Tele news channel the journalists had been abducted by "unknown elements".

The town of Kidal, situated more than 1,500 kilometres (930 miles) northeast of Mali's capital Bamako, is the traditional homeland of the Tuareg people and the birthplace of the MNLA's rebellion.

A French government source said the journalists had asked to be taken there with troops from France's Operation Serval mission but ended up going with the United Nations MINUSMA peacekeeping force after Serval refused for safety reasons.

The deaths have added to security concerns following an upsurge in rebel violence in the aftermath of a French military intervention launched in January that ousted armed groups linked to Al-Qaeda from northern Mali cities. They had taken control in the north in the chaos following a March 2012 coup.

Mali is set to hold parliamentary elections in three weeks which are supposed to mark the completion of the country's transition back to democracy.

The MNLA took control of Kidal in February but the Malian authorities finally reclaimed the city after signing a deal with the MNLA on June 18 aimed at reuniting the country.

Under the deal, MNLA forces moved into barracks as regular Malian troops were deployed to secure Kidal.

Some 2,000 French troops from an initial deployment of 3,000 will remain on the ground -- including around Kidal -- until the end of December, with the withdrawal of a further 1,000 to be completed by the end of January 2014.

MINUSMA is eventually expected to comprise about 12,600 troops and police but Malian soldiers have nevertheless voiced concerns over the prospect of France's departure from its former colony.

Many Malians accuse the light-skinned Tuareg of being responsible for the chaotic sequence that saw the country split in two for nine months and shattered what had been considered a democratic success story in the restive region of west Africa.