From hero to zero and to giving-back: Ali Jara 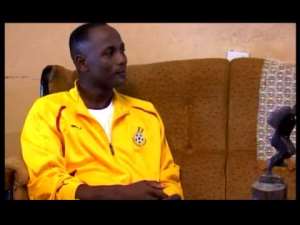 Celebrated Ghana U-17 goalkeeper Ali Jara was only weeks away from signing a professional contract with German club side Cologne when by a strange twist of fate, his world came crushing down.

His movement was impaired by a waist problem that had previously not been detected. His dream of becoming a top professional was shattered and his means of livelihood disappeared.

“I shot to fame within a short period of time and lost it all within a whisker,” Jara told students and staff of Right to Dream on “Character Focus Day, on Tuesday 22nd October.

In a society where disability is frowned upon with many believing that disability is a punishment from God for the wrongs people commit in their life's, Jara was given a rude awakening to the realities of his new condition.

“My friends drove me out from their houses when I visited due to my disability,”” Jara recounted to his audience who looked on with shock. He added, “I became disabled at age 17.”

Despite the psychological trauma and difficulties he encountered in the immediate aftermath of his disability, Jara did not recoil into his shell.

He set up to Ghana's first modern goalkeeping academy as his way of giving-back to the community he lived in and society at large.

In his estimation, over 300 goalkeepers have trained at his famed goalkeeping Academy in Accra including but not restricted to current Black Stars goalie Fatau Dauda and RtD first team goalkeeper Ali Abass.

“Society will always depend on us no matter what, whether you have enough money or not. We always have our part to play,” Jara stressed.

He insisted that everybody has a role to give-back to his or her community no matter the financial or physical condition they find themselves in.

Jara was quick to advice the young players at RtD to take a cue from his story and make the most out of the opportunity they have at RtD.

“Anything can happen within a short period of time so you need to make the most of what you have."

He also warned the students to be wary of the friends they make in life saying, “Be careful the friends you make because some of them will desert you when you need them the most.”

He noted that the young footballers at RtD Academy are lucky to be in the situation they find themselves compared to the hardships their peers go through on the streets to fend for themselves on a daily basis.

Jara's speech was very emotional, inspirational and motivational for the students and staff who witnessed it.

“Shocking story! I have never heard any story like that in my whole life. Jara said we should never give up on our dreams,” RtD Scholar Armeyawu Muntari summed up his feelings.

He added, “We have to value how important life is and count ourselves very lucky to be at RtD. We're blessed!”

Despite the challenges he faced, Jara said he is proud to be the only person running a goalkeeper's academy in Ghana and West Africa. Jara is the current Ghana Amputee National team coach.