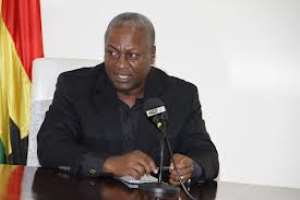 The Minister for Information and Media Relations, Mahama Ayariga, has hinted that the John Dramani Mahama-government has launched full-scale investigations into the alleged GH¢144 million looted from the national treasury through the Ghana Revenue Authority (GRA).

'We are still looking into it… If we find out that something happened there that is clearly illegal, I can assure that government will not hesitate to take the agency on, and get the right thing done,' Mahama stated during a Newsfile programme on Joy FM last Saturday.

The Chronicle had reported in its Thursday October 24 th edition detailing how the GH¢144 million was looted from state coffers at the GRA.

According to the story, the GRA entered into an agreement with Subah Infosolutions Limited, a wholly-owned Ghanaian company, to electronically monitor revenue generated by the telecom companies.

Prior to the signing of the agreement, Parliament had already passed the Communications Service Tax Law, mandating the government to electronically monitor revenues generated by the telecom companies, to ensure that the state was not cheated when it comes to the declaration of their taxes.

This compelled the government to suspend the operationalisation of the law for a review. Unfortunately, before the review could take place, the GRA had already signed an agreement with Subah Infosolutions Limited, an IT company, which is being managed by an Indian national, to electronically monitor revenue generated by the telecom companies. The contract was worth $100 million per year.

Under the agreement, Infosolutions was to deploy IT equipment that would hook up with those of the telecom companies, to electronically monitor the traffic on their network, and the revenue they are to pay to the state.

Though this equipment, according to the telecom companies which spoke to The Chronicle , was never deplored, Subah Infosolutions was still submitting bills to the GRA, which the latter hurriedly honoured, even though they knew that Infosolutions did not merit the money being paid it.

Section 14 of the revised Communication Service Tax Law, which was passed by Parliament on Tuesday, July 9, 2013, states that the Minister;

i. in collaboration with the Minister responsible for Communications, shall establish a monitoring mechanism to verify the actual revenue that accrue to service providers for the purpose of computing taxes due to the government under this Act

ii. Shall have physical access to the physical network nodes of the service provider's network at an equivalent point in the network, where the network providers' billing systems is connected.

iii. Shall ensure that a common of monitoring revenues under this Act, as well as revenues accruing from levies under the National Communications Authority Act 2008, (Act 769).

(b) Any operator who fails to provide access to its network for Government or its appointed agents, as specified in subsection (4)(a)(ii), commits an offence, and is liable to pay a penalty of five percent of annual gross revenue of the last united financial statement after the first thirty days, and if the situation persists after ninety days, the National Communication Authority may revoke its operating license.

An operator, who has an objection to the introduction of any equipment to a physical node on its network, shall, within seven days of receipt of a request from Government or its appointed agents, demonstrate before a High Court the validity of its stated reasons for the objection.'

The Chronicle established that apart from signing the agreement long before the new law became operational, thus making the whole agreement illegal, Subah Infosolutions did not also follow the rules of deploring the monitoring equipment to link up with that of the telecom companies as specified in the law, yet it was still receiving payment from the GRA for absolutely no work done.

Documentary evidence shows that various sums of money, ranging between GH¢2 and 5 million, was being transferred into the Stanbic Bank account of Subah Infosolutions on a monthly basis by the GRA, the revenue collecting agency of the government.

The Information Minister, in the Joy FM Newsfile programme, noted: 'Let's go and look at the whole technology and see whether you need a monitoring mechanism to ascertain exactly how much the telecos owe.'

Meanwhile, The Chronicle is investigating a Minister of State who was reportedly 'approached' by one of the protagonists in the case, but failed to bring decisive action against them, except saying: 'you are even under investigation.'  Stay tuned.