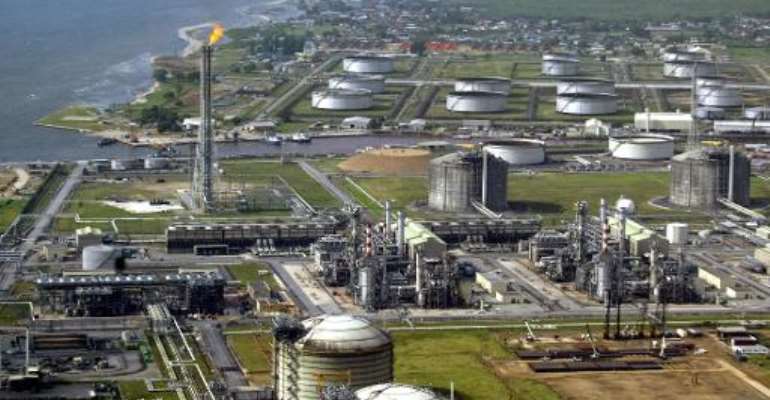 A file picture taken on May 18, 2005 shows a view of oil giant Shell's oil and gas terminal on Bonny Island in southern Nigeria's Niger Delta. By Pius Utomi Ekpei (AFP/File)

Lagos (AFP) - Anglo-Dutch oil giant Shell said on Monday that it had halted crude exports from a key terminal in southern Nigeria because of a leak in a supply pipeline.

Shell said its Nigerian subsidiary SPDC was working to repair a leak on one of its pipelines under the sea from its Forcados Oil terminal.

"The line was immediately shut down when we observed the leak on March 4, 2014," Shell said, without disclosing the volume of crude exports affected.

With a capacity of 400,000 barrels of crude per day, Forcados is one of Nigeria's main export terminals.

Shell has blamed repeated oil thefts and sabotage of key pipelines as the major cause of spills and pollution in the oil-producing region.

Crude oil theft is a major problem in Nigeria, with estimates that the country loses some $6 billion (4.3 billion euros) in revenue per year.

Last month, Shell shut the Nembe Creek trunkline because of a leak, leading to an estimated output loss of 95,000 barrels per day.