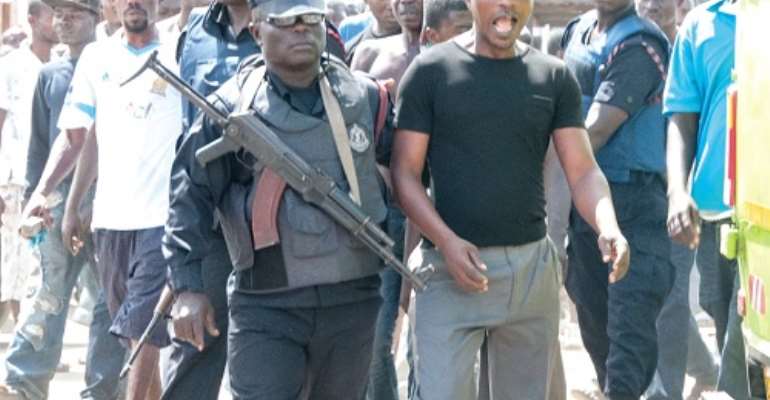 Fourteen drivers who blocked portions of the Apenkwa-Tesano road in Accra and pelted the police with stones have been arrested by the Tesano Police.


Eight others who abandoned their taxis which were used to block the road have had their cars towed to the Tesano Police Station.

According to Chief Superintendent Francis Aboagye Nyarko, Tesano Divisional Police Commander, those arrested and the owners of the towed taxis would be put before court for violating the Public Order Act which required them to inform the police five days before they demonstrated.

SCUTA
The drivers were continuing a demonstration they started last Thursday, against a directive from the Steering Committee of the Urban Transport (SCUTA) to all commercial vehicles to either register with a recognised commercial road transport organisation or form one.

Yesterday's demonstration took place in most parts of Accra, especially at Alajo, Zodiak, Dansoman Last Stop, Tesano and Odorkor, among others.

The taxi drivers prevented their colleagues who did not join in the protest from picking passengers. In some cases, the action culminated in heckling of or injury to other passengers and drivers.

SCUTA is made up of chief executives of all the metropolitan, municipal and district assemblies in Accra and the Ghana Road Transport Coordinating Council (GRTCC).

Last Thursday, the GRTCC, at a news conference organised by SCUTA, explained that the era when individuals acquired commercial vehicles and operated them without belonging to any recognised transport organisation was over.

Police advice
Briefing the Daily Graphic, Chief Superintendent Nyarko expressed surprise that the drivers had taken the law into their own hands, because some of the drivers he advised about a week ago, had initiated moves to form their own organisation.

He said his latest information indicated that they had been given some forms to fill after which they would be granted the licence to operate as an organisation.

Demonstration
Chanting war songs and wearing red bands on their hands and heads, they marched through some streets of Accra to protest the directive that all taxi drivers in the metropolis should register with a particular union or station.

Scores of taxi drivers parked their cars, while passengers were compelled to either walk or wait in long queues at the lorry stations to use 'trotro' as alternative.

At Odorkor, the angry taxi drivers blocked the road and prevented other drivers from using it.

Some of the drivers who spoke to the Daily Graphic complained that they were fed up with the numerous directives from the Accra Metropolitan Assembly (AMA) such as the introduction of an embossment system and payment of income tax.

Other taxi drivers who demonstrated in different parts of  the city prevented their colleagues who did not join in the protest from picking passengers.

This resulted in clashes between drivers who claimed to belong to unions or were registered with a station and so were allowed to work and others who were described as floating drivers.