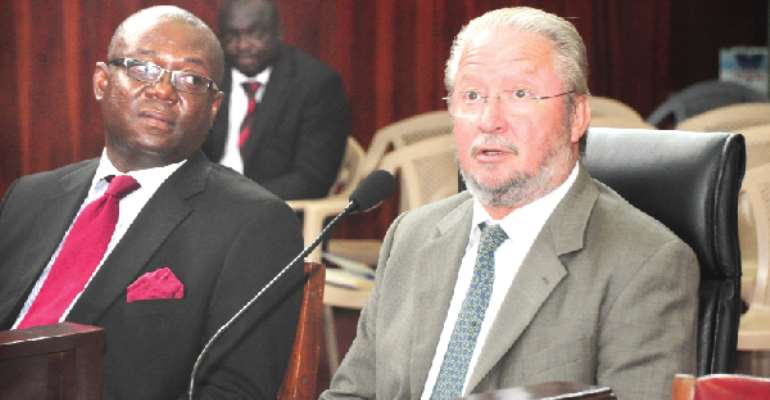 The mystery surrounding the sale of a Ghana National Petroleum Corporation (GNPC) drill ship in 2001, for the settlement of judgement debt deepened yesterday when an official of Societe General Ghana (SGG) told the Judgement Debt Commission that the company could not trace any document on the sale of the Discoverer 511.

The Managing Director of SGG, Mr Gilbert Hie, said contacts with the parent company, Societe General (SG) in Paris, France, to track the documents on the sale of the drill ship and the court case in London between the SG and the GNPC, which led to the judgement debt payment, did not yield positive results.

His submission attracted an expression of shock from counsel for the commission, Dometi Kofi Sokpor, who said, 'I'm surprised; I can't believe the documents are destroyed or can't be traced.'

But Mr Hie assuaged the fear of the commission when he said: 'It's not strange or surprising to me because under French law we can only keep documents for 10 years.'

He could, however, not tell whether or not the documents had been destroyed under the circumstances.

'What I know is that under French law, we can only keep documents for 10 years,' he reiterated.

Commission's reaction
The Sole Commissioner, Mr Justice Yaw Apau, intervened in a remark that captured the mood of the commission: 'Counsel, as the situation is, the commission has hit blank; it appears the witness can't assist us.

'I think there is nothing we can do today. We'll still delve into other issues and when we need your assistance we'll come back to you,' he said, as he discharged Mr Hie from the witness's box.

Mr Justice Apau said under the circumstance, the commission would soon invite Messrs Albert Kan-Dapaah and K. T. Hammond, under whose tenure as Minister of Energy and Deputy Minister of Energy, respectively, the GNPC drill ship was sold.

Mr Sokpor later explained that Mr Hie's submission that documents on the sale of the drill ship could not be traced from SG did not mean the commission had hit a dead end.

He said the commission had a few documents from the GNPC and expressed the hope that when Messrs Kan-Dapaah and Hammond appeared before the commission, it would get more documents.

Foreign Affairs
Officials of the Ministry of Foreign Affairs also appeared before the commission in the case involving Mr James Manu, a former employee of the ministry and judgement debt beneficiary.

Mr Manu did not make an appearance and, as counsel for the commission explained, he could not be traced for service of the subpoena.

He had worked with the Ministry of Foreign Affairs for 25 years and was stationed at the Ghana High Commission in London prior to his retirement.

In 1999, he voluntarily retired from the foreign service and, on his retirement, he was paid £10,463.17 as end-of-service benefit.

However, dissatisfied with the retirement package, he initiated a court action against the state in 2006 and subsequently secured judgement in his favour and was paid an additional end-of-service benefit of GH¢60,052.

Lack of defence
According to Mr Justice Apau, the payment of judgement debt to Mr Manu was made possible because the Attorney-General did not defend the action in court or obtain requisite information from the Ministry of Foreign Affairs to mount a defence.

'So whether Mr Manu deserves the money paid him or not is another matter,' he remarked.

Africa Automobile claims
The claims by Africa Automobile Limited (AAL) of monies owed the company by some ministries, departments and agencies (MDAs) were revisited at the sitting, with the Ministry of Water Resources, Works and Housing putting in a defence against AAL's claims of supplying vehicles and providing services for the ministry.

But the Director of Internal Audit at the ministry, Mr Eric Osei Afriyie, told the commission that after going through documents, officials of the ministry did not find any transaction with AAL in respect of the claims made by the Mitsubishi automobile dealer.

Mr Justice Apau was displeased about the circumstances under which judgement debts were paid, saying, everybody saw the state as an amorphous institution from which money went out 'just like that'.

'It's sad,' he said in a tone that reflected his disappointment.