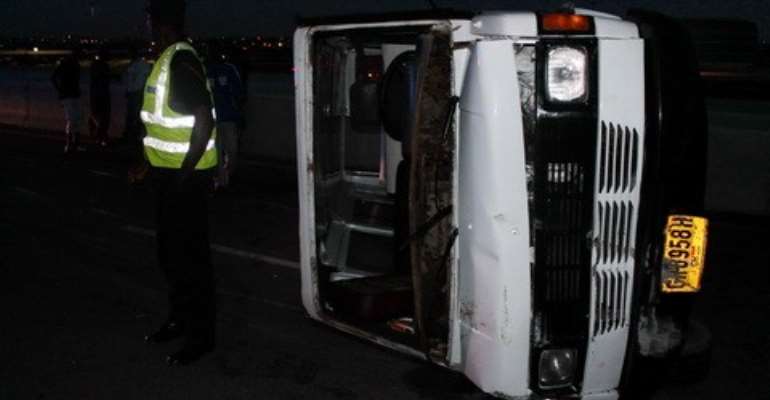 One person has been severely injured in what could have been a fatal accident on the N1 overpass at Mallam Junction, a suburb of Accra, around 6:00 pm on Sunday September 15.

The accident occurred when a 207 Mercedes Benz bus with registration number GR 895811 lost control and overturned twice - hitting a taxi cab in the process.

The injured man, who is in his thirties fractured his left hand. He was in the Benz bus which had only two occupants aside the driver. He was immediately rushed to the hospital in another taxi cab.

The situation created a heavy traffic jam because some of the motorists failed to adhere the warning signs mounted by the police.

Narrating the incident to Myjoyonline.com the driver of the bus, Stephen Aboagye, who escaped unscathed, said he suspects his car developed a mechanical fault since it was an imported second-hand vehicle which has been undergoing many mechanic works in the past few months.


Stephen Aboagye said he was driving the car to another shop to check the alignment when he lost control at a sharp curve, somersaulted and hit the taxi cab which was then moving in the opposite lane.

The Driver of the taxi cab, Mr. John Arhin, said the Benz bus was on top speed, indicating had it been travelling at a reduced speed the crash would have been avoided.

Ghana not likely to get next batch of COVID vaccines until m...
42 minutes ago