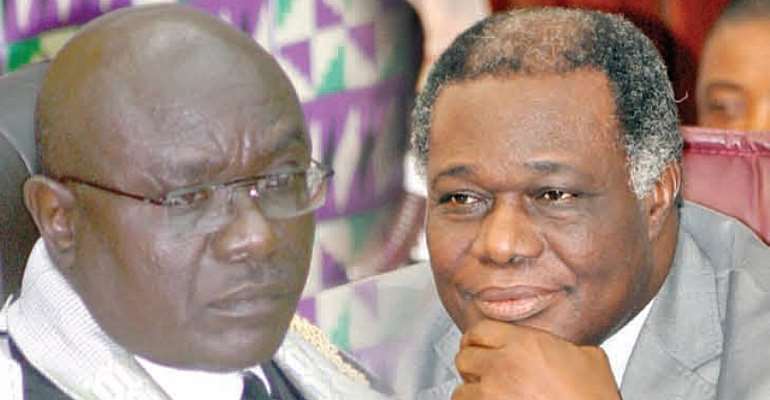 THERE SEEMS to be some form of cold war between the Speaker of Parliament Edward Doe Adjaho and the First Deputy Speaker Ebo Barton-Odro.

Sources close to Parliament have hinted DAILY GUIDE that the strained relations between the two leaders of the House is as a result of a standoff over a government bungalow close to the Christ the King Roman Catholic Church on the Jawaharlal Nehru Road at Cantonments in Accra, which has been allocated to the First Deputy Speaker.

The bungalow in question, which is currently being occupied by the Speaker Mr Adjaho, is said to have been designated as the official residence of the First Deputy Speaker, a position now occupied by Mr Barton- Odro, Member of Parliament (MP) for Cape Coast North.

The First Deputy Speaker, who was a Deputy Minister of Justice and Attorney General until his elevation, is said to be perching in his former official residence since Mr Adjaho has failed to vacate the premises even after he has been elevated to the position of Speaker of Parliament.

It is not clear if Mr Barton- Odro also received the GH¢50,000 given to each of the 275 MPs as accommodation allowance at the inception of the current Parliament.

This is what seems to have created some form of tension between the two NDC chieftains, with Barton-Odro complaining itterly to some of his colleague MPs about the treatment.

The Speaker's official residence, which is located at Cantonments, a few meters away from the famous Togo Embassy in Accra, was last occupied by former Speaker Ebenezer Begyina Sekyi-Hughes, whose exit from the facility raised eyebrows after he allegedly ransacked the building and purportedly carried every valuable away.

The immediate past Speaker, Joyce Bamford-Addo, a former Supreme Court Justice, never stayed in the apartment, as she lived in her own house throughout the period she served as Speaker, after the government had spent a gargantuan amount of money to renovate the place.

An undisclosed high amount of money has gone into the latest renovations being undertaken for Mr Adjaho, DAILY GUIDE has learnt.

The Director of Public Affairs in Parliament, Jones Kugblenu has confirmed to DAILY GUIDE that renovation works on the building is 95 per cent complete.

'We are getting the place ready for the Speaker to move in,' he said, 'since the building has not been occupied for four years.'

He however noted: 'In fact he's (referring to the Speaker) been visiting there; he's being putting pressure on the workers to finish so that he can move in and then make way for the First Deputy Speaker to also move into his residence.'

Mr. Kugblenu was however unable to say how much has gone into the said renovation of the Speaker's official residence.

But even if Mr Adjaho moves in, the Deputy Speaker still has to wait for a while because the place has to be renovated and that can take three to six months depending on the availability of cash.

The Deputy Speaker's residence has to be refurbished and refurnished as in the case of every government bungalow.