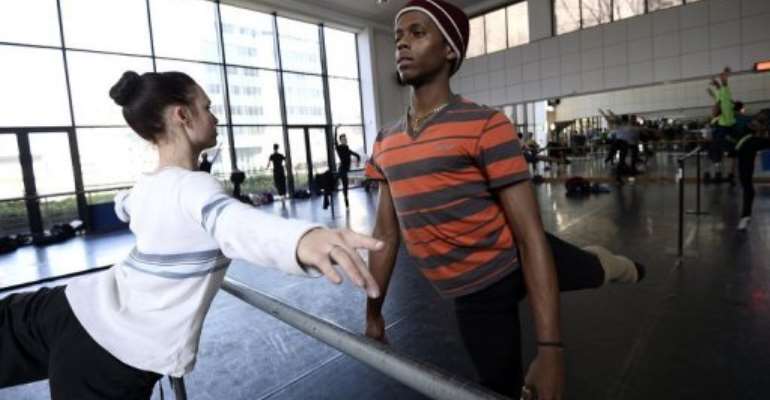 JOHANNESBURG (AFP) - It may still have a small following, but one dance company is determined to bring ballet, with its roots in the Italian Renaissance, to urban South Africa.

Onstage pirouettes, jetes and turnouts are still very much a foreign concept for most Africans, but the South African Mzansi Ballet wants to change that.

At the company's studios in Johannesburg's gritty but increasingly bohemian downtown, dancers are put through their paces by a diminutive Cuban instructor, shouting instruction in French.

"People are beginning to see the value of ballet... slowly. The future is exciting," said chief executive Dirk Badenhorst, who believes he sees the first green shoots of change.

The Mzansi is not South Africa's first ballet company by a long shot, nor, perhaps, its most illustrious.

The Cape Town City Ballet has been running in some form since 1934 and for three decades was home to legendary prima ballerina assoluta Phyllis Spira.

The late, great Margot Fonteyn was once a guest artist there.

Apart from training 24 full-time dancers who stage classical performances like "Giselle", "The Nutcracker" and "Sleeping Beauty", the Mzansi Ballet focuses on unearthing untapped talent in underprivileged parts of the city.

"We are fertilising the ground for new talent to blossom," said Badenhorst.

The word "Mzansi" means south in the Zulu language and is commonly used to refer to South Africa.

Youngsters in townships like Soweto, Alexandra and Sophiatown now have a shot at a performance art long seen as the preserve of the privileged.

"Hopefully these children will rise through the ranks and become our stars of tomorrow," said Badenhorst.

But a lot needs to be done, and funding is a constant problem.

The Mzansi Ballet was born one year ago out of a merger between two cash-strapped operations, the South African Ballet Theatre and Mzansi Productions.

"It's encouraging that the government is now beginning to take notice of our work," Badenhorst said.

"We don't need to keep on surviving, we need to thrive."

He believes that a nation's level of development can be judged by its attitude to the arts.

He hopes that South Africa would learn from Russia, its partner in the BRICS grouping of five large fast-growing economies, about the importance of dance.

The company must also overcome notions that ballet is "un-African" or at least an unwanted cultural import.

"I believe that we need to begin to tell our own stories, our own African fairytales. As Africans we've got so much wonderful stories," Badenhorst said.

In 2008, a forerunner of the Mzansi Ballet gave an African twist to "The Nutcracker" classic, replacing the winter theme with the sun, Kalahari sand dunes and baobab trees.

"The response was amazing," enthused Badenhorst.

"We need to tell more of our African stories, and take them to the world."

Badenhorst recalled an event where the company set up a stage in a football field in a Johannesburg township, drawing a large crowd.

"I understand that we have to make the most of the facilities already in place and not wait for magnificent theatres," said Badenhorst.

"The talent is definitely there, but it needs support. We are doing our bit," he said.

Hottest Photo Reports
Catch up with all the political quotes from our politicians.
Advertise here
More Africa
ModernGhana Links
African players in Europe: Salah scores to share Golden Boot lead
Fired-up All Blacks chase Rugby Championship whitewash
Bekele reveals plan to run marathon in under two hours
Working session of the Technical Committee for the selection of beneficiaries of the Young Graduates Internship Programme in ECOWAS institutions, 2021 edition
Niger speeds up efforts to build first hydroelectric dam
Soul-searching for Boks ahead of 'special' 100th All Blacks clash
Mandela to 'House of Pain': Five epic Springboks v All Blacks matches
'God Has a Dream': top seller for Tutu's 90th-birthday auction
The race to vaccinate: why Africa is struggling to get Covid jabs
TOP STORIES