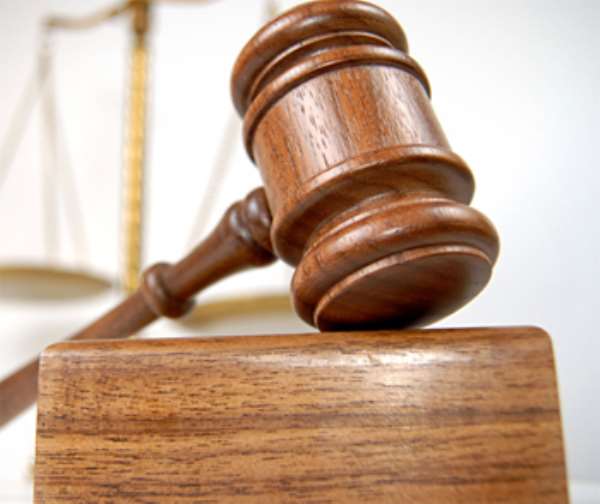 Two robbers, who went snatching taxis which they sold to unsuspecting buyers, would spend the next 91 years behind bars for their despicable acts.

The accused persons, Ibrahim Saeed, a printer, and Amartey, an auto mechanic, were arrested and put before an Accra Circuit Court after they shot a taxi driver who resisted their attempt to snatch his Kia Rio.

The court, presided over by Mr. Francis Obiri, found the accused persons guilty of conspiracy to commit crime, attempted robbery, causing harm and possession of firearms without lawful authority.

Mr. Obiri gave Saeed 15 years for conspiracy to commit crime and 30 years for attempted robbery. Both sentences were to run concurrently.

Amartey, who shot Qayson the taxi driver, was given one year for conspiracy to commit crime, 30 years for attempted robbery, 5 years for causing harm and an additional 5 years for possession of firearms without lawful authority. All sentences were also to run concurrently.

Giving reasons for his judgment, the trial judge stated that from the facts presented by the prosecution led by Ms Joyce Buerko Debrah, the accused persons, who were friends, decided to come together and rob the complainant.

He said even though the accused persons denied that they attempted to rob, there was evidence to the contrary from all the witnesses including a police informant and the taxi driver who was the complainant.

He said the prosecution noted that the accused persons had sought the assistance of a police informant to go on a robbery operation in November 2011 and the witness agreed and went with them and witnessed the robbery.

He said from the facts and evidence of the informant, it was the second accused person Amartey who tried to seize the car key and when it was not successful, shot the driver on his left shoulder  and the two took to their heels leaving the informant with the driver.

Furthermore, the judge noted that the accused persons in their evidence, denied it was the police informant who told them he worked with the police and tried to forcibly take the complainant's key.

According to him, the evidence of the accused persons contradicted their earlier statements given to the police and observed that their failure to explain the contradictions meant it was an afterthought.

Consequently, Mr. Obiri said he found the accused persons guilty of all the offences they were charged with. The accused persons pleaded for mitigation of sentence saying the judge should temper justice with mercy.

The trial judge said armed robbery had become a societal menace, adding that law abiding citizens should be free to go about their lawful activities.

He said he would give a deterrent sentence to serve as warning to other robbers that they would suffer the same fate if they were caught.