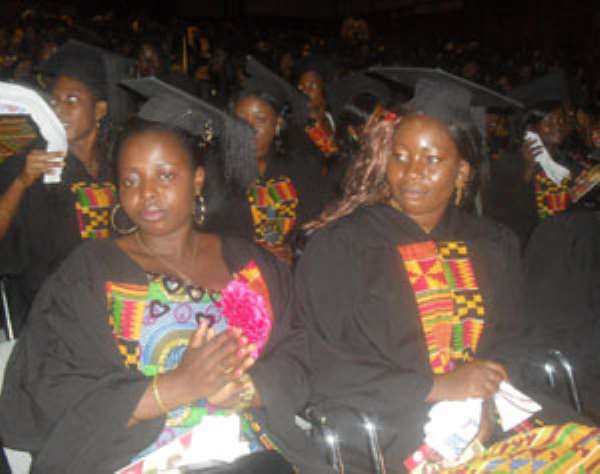 An 84 paged Strategic Plan for one of Ghana's premier learning centers; the Accra Polytechnic has been launched with a call on members of staff of the school to work assiduously to ensure the Strategy achieved the purpose for which it was prepared.

The five year Plan [2013-2013], which has ten thematic areas is to support the transformation of the Polytechnic into a Science-Art-Engineering and Business application-oriented institution that places premium on creativity and innovation.

According to the Polytechnic's Rector, Prof. Sylvester Achio, the Strategic Plan preparation which was supported by the School's Governing Council was in response to the changing trends globally and to satisfy the requirements for the implementation of a performance contract they have signed with the Ministry of Education.

He is of the view that the successful implementation of the plan would transform and sustain the Polytechnic as the premier Polytechnic in Ghana adding '' this would be attained through the strengthening of inter-faculty collaborations as well as maintaining closer relationships with prominent institutions and industry, attracting the best students and delivering the best teaching and non-teaching services''.

Prof. Achio added that they are confident that based on the Performance Contract signed, the Polytechnic, by 2016 would generate 50% of its total budget requirement from Internally Generated Funds [IGF] excluding fees, if the Government through the Education Ministry is able to fulfill its part of the contractual commitment.

In a speech read on her behalf, Prof. Jane Nana Opoku Agyemang, the Sector Minister for Education commended the Polytechnic for the initiative and added that she is full of optimism that the School under the leadership of Prof. Achio will continue to grow from strength to strength as one of the best Polytechnics in West Africa.

Touching on the Performance Contract subject, the Minister pointed out that Her Ministry signed the contract with the Polytechnic in order to improve upon its service delivery as well as its teaching and learning standards aimed at financial independence from Government subvention.

The occasion she said accords the School a new platform to showcase its new vision and new strategic plans which is necessitated by the passing of times and changes in global events which has compelled the Polytechnic to review its projects and activities so as to conform to international standards.

The Strategic Plan according to the Education Minister also affords the Accra Polytechnic the opportunity to reflect, recognize and to assess its achievements. More importantly, she added it compels the school to anticipate the future and plan adequately.

It is to ensure the success of the mandate of the Polytechnics that Government is determined to see to it that Polytechnics succeed in their resolve to provide opportunities for skills development, innovations, applied research and publications.

She challenged them to take critical steps in enforcing and making the plan work and to this effect she tasked them to extend invitations to all members of staff to come on board and perform beyond expectations in order to contribute to this common purpose.

On his part, Minister for State in charge of Public Sector Reforms, Hon. Alhassan Azong, said the 2012-13 performance contract was made possible by the intervention of the French Government through its support to the Public Sector Reforms activities in Ghana. He therefore used the opportunity to expressed Government's appreciation to its French counterparts for the support which he is of the opinion is making the Ghana- France relationship stronger.

He describes the five-year Strategic Plan as a good hope not only for the Accra Polytechnic but for all Ghanaians and development partners.

'' It is our expectation that when all is said and done, the improved efficiency in service delivery and productivity will translate into a shared growth and prosperity that will be felt in the individual as well as the Government's purse.

The Shared Growth will see the Accra Polytechnic doubling its intake and thereby giving more Ghanaians access to life-applicable vocations adding that within the Strategic Plan's period is a structural reform that will transform the School beyond its classical definition to an institute of technology, Hon. Azong indicated.

The State Minister said'' we also expect to see them expand their IGF base, to the extent of weaning themselves from Government's purse and eventually becoming a source of national income.