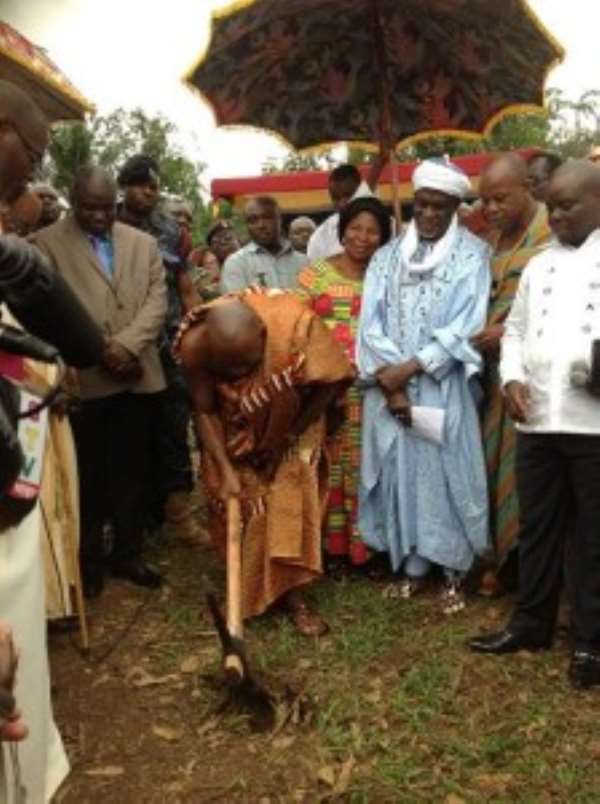 AT LONG LAST the long cherished dream of members of the Ashanti Regional chapter of the Ghana Journalists Association (GJA), of having  a Press Centre  constructed in Kumasi to facilitate the activities of the Association, has finally come into fruition.

A colourful sod cutting ceremony was yesterday performed to signal the commencement of the construction of an ultra-modern Press Centre to house members of the inky fraternity in the Ashanti Region.

Other facilities at the Centre, located at the Pine Avenue Danyame, would include a Kitchen, 2 Dining Rooms and Washrooms, and fitted with furniture and fencing.

Estimated to be completed in six months time, the project is being spearheaded by the Regional Coordinating Council (RCC) with direct approval and funding from the Presidency.

It follows appeals made earlier this year by the new administration of the Regional Ghana Journalists Association, headed by Mr. Listowell Yesu Bukarson, during a courtesy call on the Regional Minister, Hon. Eric Opoku.

When completed, the project would serve as a medium for effective meeting point for information gathering by journalists and would also serve as offices for the leadership of the GJA.

Speaking at the official sod cutting ceremony, the Ashanti Regional Minister, Eric Opoku expressed the optimism that the construction of the facility would boost the morale of members; facilitate networking and flow of information and enhance the association's dealings with stakeholders to promote national dialogue and development.

He noted that considering the critical role of the media in the development process, his administration saw it as a responsibility to help facilitate the construction of such project which he hoped would remove the challenges and constraints confronting media practitioners in the region.

Stressing that the media's role is crucial in a developing country like Ghana, Hon. Opoku underscored the need for collaboration between the media and decision makers in helping to push the country's development agenda forward.

'As the fourth estate of the realm, the media's strategic role in educating, informing and entertaining the public provides the means for enhancing transparent, participatory and accountable governance, there is certainly no doubt about this in sustaining the interface between government and the people,' He emphasized.

He therefore admonished the media to be circumspect about their reportage ahead of the Supreme Court verdict in order not to inflame passion and endanger the peace and stability the country is enjoying.

The Ashanti Regional chairman of the GJA, Mr. Listowell Yesu Bukarson said the responsibility was now on the media to streamline its activities, uphold the ethics and be professional in their duties, stressing that once the project is completed, members would not have any excuse to make good use of the facility to enhance their operations.

He therefore charged colleague journalists to exercise caution in the course of their reportage on the upcoming Supreme Court verdict, warning that the association would not hesitate to name and shame anyone found to have behaved in any way that could bring the name of the association into disrepute.

Both the mayor of Kumasi, Mr. Kojo Bonsu and the Bantamahene, Baffour Owusu Amankwatia IV, also emphasized the need for the media to exhibit high sense of professionalism when reporting or commenting on the Supreme Court petition.

I'm not ready to resign, your agenda to bring me down won't ...
49 minutes ago