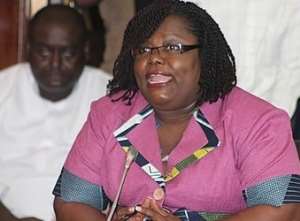 'My father is sick and my mother is dead, so I am living with my auntie,' says a 16-year old pregnant school dropout who lives at Nima in Accra.

'I do not know my father, and my mother is a drunkard; so I live with my grandmother,' cries another 17-year-old girl, who resides in Osu, another neighbourhood in Accra.

Sadly tapping her tummy gently, yet another girl---18-year-old pregnant school dropout in Osu, gloomily declares 'My parents are divorced, so my mother has gone back to her hometown. I live with my grandmother.'

These rather sad tales were highlights of a mid-term evaluation report of a study into commercial exploitation of children (CSEC) discussed at a national stakeholders dissemination meeting on CSEC in Accra.

The study which formed part of two projects being run concurrently by International Needs Ghana to protect children from commercial sex exploitation in and around Accra, found that while the number of children being pushed into early marriage were on the decline, poverty and broken homes were pushing children into commercial sex.

As part of the project which aims at contributing to the elimination of child labour, 1000 children in Accra are expected to be withdrawn and or prevented from being victims of  CSEC, rehabilitated and re-integrated into their families and society at large.

Additionally, by the end of the project, 400 parents or caregivers of victims or those at risk to CSEC are expected to be empowered economically.

The international Labour Organisation (ILO) defined commercial sexual exploitation of children as the exploitation by an adult with respect to a child or an adolescent - female or male - less than 18 years old; accompanied by a payment in money or in kind to the child or adolescent (male or female) or to one or more third parties.

But the study which had respondents from Accra New Town, Bubiashie, Osu, La, Nima, Maamobi Mallam Atta, James Town, Korle Worko, Chorkor, Agbogbloshie, Timber Market and Madina, found that 41 per cent of the girls who were respondents affirmed that they worked to earn a living while in school.

The project being funded by the Australian Agency for International Development (AusAID) and the Ministry of Foreign Affairs and Trade (MFAT) of New Zealand, is running  from April 2011 to March 2014.

It also found that while a lot more girls in school were having sex with older men, 30 per cent of all the school dropout respondents had been pregnant before with 17 per cent already having a child while 13 per cent had caused abortion.

Mr Awadey said from the findings, Many mothers only gave food to their daughters but even this is not always. Many daughters were expected to provide their own needs - a situation which exposed them to CSEC. Atrocities of step mothers also contributed to children (including boys) leaving home, ending up on the streets and becoming vulnerable to CSEC.'

'The dynamics of commercial sexual exploitation is summed up by an 18-year-old school drop out single mother respondent, who said you use what you have to get what you want.'

The study recommended among other things, reinforced awareness raising and education with particular attention to sex and reproductive health.

Rev Walter Pimpong, the Executive Director of ING, commenting on the report said prevailing economic situations coupled with the breakdown of the extended family system, had resulted in parents and family members of children not living up to their responsibilities.

He said a way to reverse the trend was for the country's educational system to take into cognisance the prevailing moral problems.