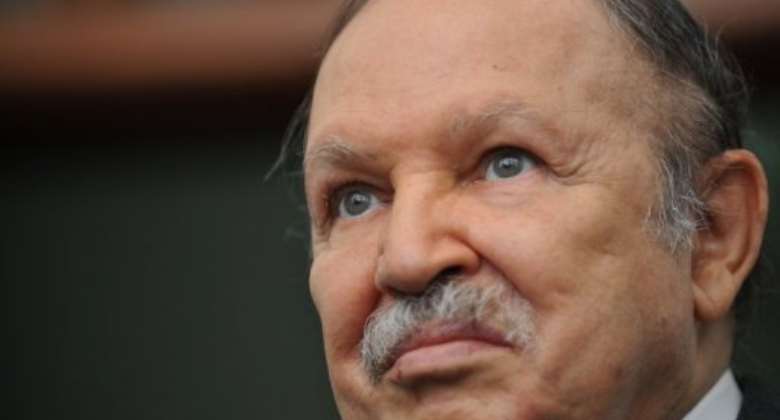 Algerian President Abdelaziz Bouteflika, pictured in Algiers on May 25, 2010. By Fayez Nureldine (AFP/File)

ALGIERS (AFP) - The health problems of Algerian President Abdelaziz Bouteflika, who suffered a mini-stroke at the weekend, have intensified speculation about who might succeed him one year ahead of presidential elections.

His hospitalisation in France, coming amid press reports of corruption scandals implicating members of his family, have undermined speculation about the 76-year-old president running for a fourth term.

Bouteflika on Saturday suffered a "transient ischaemia" -- a mini stroke which according to the American Heart Association "is more accurately characterised as a 'warning stroke', a warning you should take very seriously."

He was flown to Paris for treatment at the Val de Grace military hospital, which often receives high-profile patients.

Officials in Algeria were quick to allay fears over his condition, with his Algerian doctor telling AFP on Monday that he was making good progress.

"Everything is going very well for the president. I haven't spoken with him directly today but I have spoken with his entourage," Rachid Bougherbal said, while declining to give details about how long he would remain in the hospital.

Earlier, the cardiology professor had told the Algerian daily Ennahar that Bouteflika "will come back to Algeria in several days... in not more than seven days," after speaking to Bouteflika on Sunday.

But the media and analysts are openly questioning the implications of Bouteflika's latest health scare, less than a year before a presidential election, and with Algerian political machinations typically shrouded in secrecy.

"The announcement of his illness -- something unusual for the Algerian regime -- is destined to prepare public opinion for the succession of Bouteflika," political analyst Rachid Tlemcani told AFP.

The president's health has been an endless source of speculation in Algeria, after he had surgery in Paris for a bleeding stomach ulcer in 2005 and spent a long period convalescing.

A leaked US diplomatic cable in 2007 suggested he might be suffering from terminal stomach cancer, although Algiers at the time dismissed such speculation as "crazy rumours."

The latest development has brought next year's presidential election sharply into focus.

Tlemcani said Bouteflika could yet run again if he recovered. But if not, "the political field will be open for the first time in Algeria's history."

Others argued that the health scare meant Bouteflika's political end was in sight.

Rachid Grim, a political expert quoted in independent daily El Watan, said "the question of a fourth term will no longer arise. It is finished."

Algeria's decision-makers have already considered this scenario, he said, adding that "it would not be surprising if they pulled someone they have already prepared out of the hat."

Since independence from France in 1962, the army has always chosen Algeria's president.

An editorial in the Quotidien d'Oran said Bouteflika's deteriorating health made "undeniable... the need to question his ability to lead the country," and called for him to step down "in a serene and democratic manner."

Bouteflika began his current third term in 2009, after a constitutional amendment lifted the limit on the number of times he can run for office.

A veteran of Algeria's war of independence, he later helped end a decade-long civil war that erupted in 1992 when the army cancelled elections that Islamists were poised to win, and which killed at least 150,000 people.

He is credited abroad with restoring stability.

But critics accuse him of authoritarianism, despite the limited political reforms he launched in April 2011, and of presiding over rampant corruption and economic stagnation, with most Algerians failing to benefit from the country's vast hydrocarbons wealth.

"Many of the social, economic and political challenges that triggered uprisings in neighbouring north African countries fester just beneath the surface in Algeria," the Carnegie Middle East Centre said in a report last week.

12 organised crime suspects busted for carjacking, robbery a...
39 minutes ago