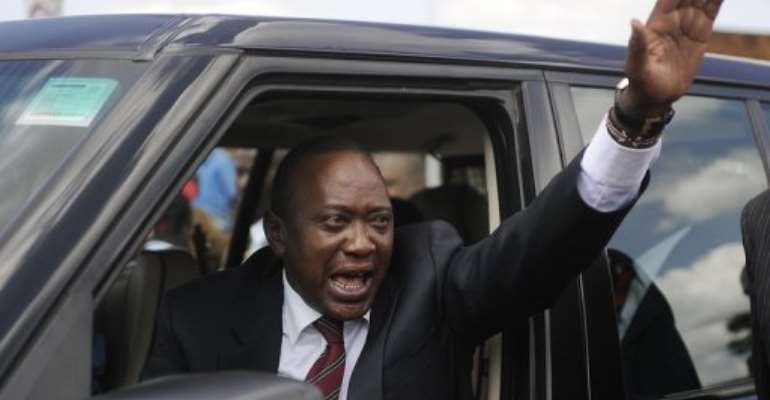 Uhuru Kenyatta waves after attending mass at the Martyrs of Uganda Catholic church in Gatundu, Kiambu on March 10, 2013. By Simon Maina (AFP/File)

THE HAGUE (AFP) - Lawyers for Kenya's president-elect Uhuru Kenyatta are to argue Monday that the International Criminal Court should dismiss crimes against humanity charges against him over post-2007 election violence.

At a hearing scheduled for 1400 GMT at the Hague-based court, a three-judge bench will notably hear defence lawyer Steven Kay's request to scrap his client's July trial date and send the case back to the ICC's pre-trial chambers.

The case is being closely watched in Kenya and around the world after ICC prosecutors a week ago asked to drop all charges against Kenyatta's co-accused, top civil servant Francis Muthaura.

Should the five crimes against humanity charges against Kenyatta stand, he will become the first-ever president to have to fly off to The Hague to face a trial that could last at least two years shortly after taking office.

Kenyatta, 51, was proclaimed Kenyan president just over a week ago following the first elections after the east African country's deadly post-poll violence five years ago in which ICC prosecutors say some 1,100 people were killed.

Prosecutors suspect Kenyatta of having paid the Mungiki, a sect-like criminal gang notorious for beheading its victims, to lead reprisal attacks and defend the Kikuyu community when violence ripped through Kenya following disputed polls in late 2007.

Kenyatta has rejected the allegations.

His defence has argued that a statement by a prosecution witness, so-called witness "OTP-4" who later recanted testimony, lay at the heart of the case.

"The evidence they (the prosecution) are seeking to rely on in the case against Uhuru Kenyatta is utterly flawed," Kay said in a statement released by Kenyatta's party ahead of the hearing.

A pre-trial judge's decision in January last year to confirm the charges against Kenyatta, son of Kenya's founding father Jomo Kenyatta, was based on the "crucial evidence" by OTP-4 who placed the top politician at meetings with Mungiki members.

But witness OTP-4 has since been discredited with ICC chief prosecutor Fatou Bensouda dropping all charges against Kenyatta's co-accused, former civil servant Muthaura on March 11 as a direct result.

It was the first time ICC prosecutors decided to drop a case since the world's first permanent independent court began operating in 2002.

Kenyatta -- one of Africa's richest and most powerful men -- and Muthaura were charged for their alleged involvement in fomenting the wave of deadly 2007-08 violence.

The clashes destroyed Kenya's image as a beacon of stability in the region, hurt its tourism industry and exposed long-simmering ethnic rifts among its population.

In Kenya on Monday attention however was focused on another court case, a legal challenge filed Saturday by outgoing Prime Minister Raila Odinga alleging the March 4 polls that elected Kenyatta were rigged.

There was little or no mention of the ICC case made in Kenyan newspapers, which instead focused on Kenyatta's appeal on Sunday for people to "pray and maintain peace" as he led church prayers on the Indian Ocean coast.

Have Confidence In Me, I'm An Honest Leader — Akufo-Addo
19 minutes ago