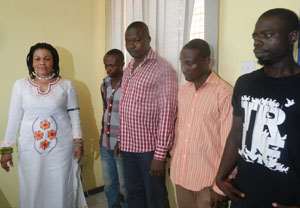 Patricia Asieduaa, popularly known as Nana Agradaa, a fetish priestess, conned people to believe that she could double cash and ended up extorting money from them but could not deliver on her promise.

The five have since been caged at the headquarters of the Criminal Investigations Department (CID) of the Ghana Police Service, while victims who fell prey to the plot have thronged the premises upon hearing the news.

COP Prosper Agblor, Director General of CID, briefing journalists on Thursday, noted that the suspects fooled people into believing that they had magic powers and could double any amount of money.

He said that the suspect and her accomplices had since September 2012 been advertising on radio stations in Accra and Kasoa that she had powers of solving problems and changing the fortunes of people.

The advertisement on radio and television, the CID Director General pointed out, attracted a large number of customers to her shrine located at Sowutuom, a suburb of Accra.

'She made false representations to persons who visited her shrine that she could multiply their money in several folds and make them rich instantly.'

In addition to claiming to solve myriads of spiritual problems, COP Agblor said the priestess also alleged that she could provide lotto numbers which could make stakers hit the jackpot.

'Under these pretences, Patricia Asieduaa demanded and obtained from her victims various sums of money with the promise of performing some rituals.'

COP Agblor said the priestess made a request to her victims to acquire a particular oil called 'Melindu oil' and 'Cammo oil' which was to be bought from one Mohammed Rabiu, who was later identified as one of the accomplices.

'None of the persons who visited Patrica Asieduaa got the response they wanted,' said the Director General who added that when the victims realised that it was fraudulent they demanded their money but they were brutally assaulted by bodyguards of the priestess.

He stated that the police arrested the priestess and her accomplices on Tuesday, March 12, 2013.

As at press time yesterday, 35 people had come forward and identified themselves to the police as victims of the scam.  A total sum of GH¢58,780 had been extorted from them.

The priestess, COP Agblor stated, had admitted receiving sums of money from persons who visited her shrine but claimed the victims failed to abide by the directives of her gods resulting in their inability to obtain the expected results.

'This is a clear case of fraud,' the CID Director General stated and added that 'Patricia Asiedua and her accomplice will be arraigned before court.'

He warned the public to be vigilant of such scams and urged them not to fall into the trap of such criminals by believing everything they hear.

He advised that the police should be notified immediately the public obtain information on anyone who claims to have the power to double money.

The CID Director General urged the media to refrain from allowing their mediums to be used in perpetrating crime.

Victims Account
Bright Kattah, a 25-year-old pharmacist, who is one of the victims, told DAILY GUIDE that he was enticed by the performance of the money doubling powers of the priestess on an Accra based television.

'Because I saw it on television, I thought it was credible,' said the young man who wanted to make quick money, adding 'everybody needs money so if you have someone who can make it easier for you, why not? Anyone would jump at such an opportunity.'

He said when he visited the shrine with GH¢500, he was assured it could be multiplied to GH¢50,000, but he was asked to pay an extra GH¢1,500 within one week to be used to buy some items for the ritual.

Another victim, Kofi Charles, a 42-year-old seafarer, said he heard the priestess on a radio station and called on her with an amount of GH¢1,000, which was to be increased to GH¢50,000.

'I was asked to bring three goats, which would cost GH¢2,500, but I was only able to pay GH¢1,500 and given the telephone number of a man at Nima to contact for a special oil.'

'I contacted the man at Nima and bought the oil for GH¢100 but when I brought it back, the priestess said a bad spirit in my room had contaminated the oil so it cannot be used.'

Most of the victims, who spoke to DAILY GUIDE, said they were determined to get their money back 'by hook or crook.'