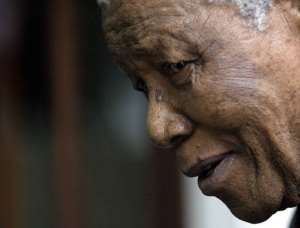 The bleak assessment of the anti-apartheid icon's health came in papers submitted by his relatives on June 28 as part of legal efforts to retrieve the remains of three of Mandela's children.

"The anticipation of his impending death is based on real and substantial grounds. The applicants are desirous of burying their father and committing him to the earth in which his descendants' remains lie," according to court papers quoted by the Mail & Guardian and other media.

"Nelson Mandela's health is perilous. (An) affidavit will be provided from physicians that he is assisted in breathing by a life support machine," it added.

Mandela, 94, has been in intensive care in a hospital in Pretoria since June 8 when he was admitted with a recurring lung infection.

The presidency has said his condition is "critical but stable" but has released few details of his illness.

A clan elder told AFP on Wednesday of last week that Mandela was on a ventilator. But South African President Jacob Zuma said the next day that his health had improved.

Mandela led the struggle against white-minority rule in South Africa and became the country's first black president after multiracial elections in 1994, following 27 years in prison.

A court in the city of Mthatha on Wednesday ordered the remains of three of Mandela's children to be immediately returned to his childhood village of Qunu.

His oldest grandson Mandla had them moved in 2011 to Mvezo, about 30 kilometres (20 miles) away, allegedly without the rest of the family's consent.