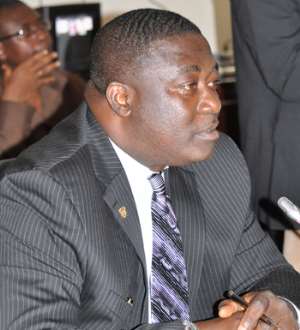 GHANA'S PARLIAMENT yesterday disregarded concerns raised by some chiefs and traditional leaders over the nomination of Dr. Henry Seidu Daannaa, a visually impaired lawyer appointed by President John Dramani Mahama for the position of the minister of Chieftaincy and Traditional Affairs, approving the nominee together with 10 others.

It would be recalled that Dr. Daannaa's nomination for the newly aligned Chieftaincy and Traditional Affairs Ministry had generated some controversy across the country, with chiefs suggesting it was an abomination to choose a visually impaired person to lead a chieftaincy institution.

According to the chiefs, a chieftaincy institution was a sacred one, insisting that a visually impaired person was not fit enough to lead the chieftaincy ministry.

Paramount Chief of the Seikwa Traditional Area in the Brong Ahafo, Nana Kwaku Dwuma Akoanda II, had told an Accra-based radio station, Hot FM, that it was an abomination for President Mahama to appoint Dr. Daannaa to head the chieftaincy ministry.

According to him, physically challenged persons were barred from being enstooled as chiefs, let alone being nominated to head the whole institution.

Nana Akoanda II said the continuous silence of his colleagues on the issue was surprising, calling on them to come out and openly condemn President Mahama's nomination.

He reiterated that all traditional leaders in the country were aware that it was against their custom and tradition to appoint a physically challenged person to either become a chief or lead the chieftaincy institution.

However, not all Ghanaian chiefs agreed with Nana Akoanda II as they accompanied Dr. Daannaa to his vetting last week.

Dr. Daannaa was born in 1955 in Tuaha in the Upper West Region.

He is recognized by the General Legal Council as the first visually impaired barrister in Ghana.

Dr. Daannaa obtained a doctorate degree in legal anthropology and a degree in Law from the London School of Economics and Political Science between 1986 and 1992.

He also obtained a Masters' degree in Law from the same University in 1982, after completing an undergraduate law programme at the University of Ghana between 1979 and 1981.

According to his curriculum vitae, he worked on the codification of chieftaincy lines of succession for 21 paramount stools in the country, and on October 3, 1997, the General Legal Council conferred a special prize award on him in recognition of his achievement as the first blind man to be trained as a lawyer at the Ghana School of Law.

Presenting its report for the approval of the nominees, the Appointments Committee of Parliament, Chaired by First Deputy Speaker Ebo Barton-Odro, indicated it had carried out its work diligently in accordance with the 1992 Constitution and Standing Orders of the House.

According to Barton-Odro, who is also the MP for Cape Coast North, the committee was satisfied that the nominees fully met the requirements of the constitution for appointment as ministers of state.