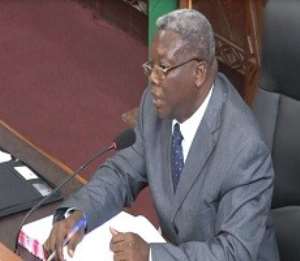 Poor keeping of critical national documents is threatening to hamper the work of the Judgement Debt Commission (JDC) as witnesses continue to plead for more time to search for and furnish the commission with documents on judgement debt payments.

At the public sitting of the JDC in Accra yesterday, the Sole Commissioner, Justice Yaw Appau, had no choice but give officials of the Controller and Accountant-General's Department (CAGD) and the Ministry of Finance and Economic Planning (MOFEP) more time to search for documents on judgement debt payments.

The commission had requested the two institutions and others to furnish it with documents on judgement debt payments and related matters in their possession from 1992 to 2012.

But the Deputy Controller and Accountant-General in charge of Treasury, James Ntim Amponsah, told the JDC yesterday that frantic efforts by CAGD officials to retrieve documents lodged at the Public Records Administration and Archives Department (PRAAD) had so far proved futile.

In line with public records administration rules which require state institutions to send their records to PRAAD after a period of time, the CAGD had sent some of its records and documents on judgement debt payments to PRAAD.

But given the challenges it faced in retrieving the documents from PRAAD, Mr Amponsah said, the CAGD had resorted to a thorough in-house search to recover some of the documents for the JDC.

That effort, he said, yielded judgement debt payment documents covering the period 1999 to 2007 and a few of them for 2008 which were submitted to the commission.

Mr Amponsah said the CAGD was continuing with efforts at its offices and PRAAD to retrieve more documents for the outstanding periods under the commission's investigations.

When they took their turn at the public sitting, officials of MOFEP presented to the commission a list of pay vouchers for judgement debt payments covering the period 2000 to 2012.

The Chief Economics Officer at MOFEP, Kwadwo Awua-Peasah, said after studying the JDC's request, the ministry thought some of the issues could best be handled by the CAGD and so it wrote to the department to discharge that responsibility.

Explaining the processes of judgement debt payments routed through the Chief Director of MOFEP, he said after scrutinising the documents to clear every doubt, pay vouchers were raised for cheques to be written for the beneficiaries.

Mr Justice Appau sought to find out why sometimes after making payments to the judgement debt beneficiaries, the ministry did not give feedback to the Attorney-General and also why sometimes the amount to be paid was compromised through negotiation after the Bank of Ghana had released the money to the ministry.

Responding, Mr Awua-Peasah said the ministry had always given feedback to the Attorney-General on judgement debt payments to beneficiaries.

He said if the judgement debt was not paid in time, it might accrue interest, which additional payment some beneficiaries demanded, thereby resulting in variations in the original amount to be paid.

According to him, delays in judgement debt payment were not deliberate but sometimes due to the liquidity situation at the time of payment.

Mr Justice Appau advised the CAGD and MOFEP officials not to wait until they appeared before the commission before presenting their documents.

The commission has adjourned its public sittings until further notice.