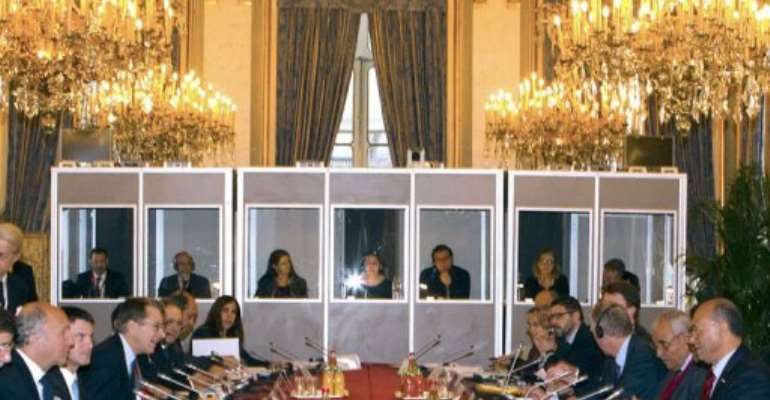 French Foreign Minister Laurent Fabius was joined for the talks by his Libyan counterpart Mohamed Abdulaziz and other top Libyan officials as well as the foreign ministers of Britain, Italy, Denmark, Turkey and Malta.

"Much has already been achieved but issues remain, including border security, weapons, the rule of law, human rights, etc," Fabius said.

He said international support for the Libyans came in many forms including "the rapid deployment of European experts to train Libyan security forces and police and help to rebuild the army, navy and air force."

Diplomatic sources said the talks were the result of serious concerns over Libyan security, including over the flood of weapons from Kadhafi's storage depots across the region since his regime's demise.

Islamist rebels who took control of Mali last year are among those believed to have benefited from the looting of Kadhafi's vast weapons storehouses.

"The security of North Africa is an integral part of the security of the Mediterranean as a whole," Libyan Foreign Minister Abdulaziz said, pointing out that his country's borders stretched over 6,000 kilometres (3,750 miles).

A statement issued after the talks said an EU mission to help better border management would be deployed by June.

Tripoli has pledged to reform its judiciary, reform the prison system and promote national reconciliation through truth-seeking processes and trying to identify and locate missing persons.

Several Western governments have been alarmed at the deteriorating security situation in Libya's second city Benghazi and many ordered their nationals to evacuate last month citing fears of terrorist attacks to avenge France's military intervention in Mali to rout Islamist rebels in the vast arid north.

Abdulaziz had earlier said a spillover from Mali's crisis could undermine security in Libya with weapons and foreign Islamist fighters flowing back to the country.

He said on Tuesday that a government team was in the eastern city last week to hear local grievances and improve things, saying: "We are really trying to control the situation.

"Some uncontrolled elements are trying to exploit the situation," he added.

Benghazi is cradle of the uprising that toppled dictator Moamer Kadhafi in 2011 but also the city where a US ambassador was killed in an attack in September.

Abdulaziz said the situation in Benghazi was a legacy of Kadhafi's rule.

"Benghazi and the east were very much marginalised. The same paradox exists in the south that also produced some kind of extremism."