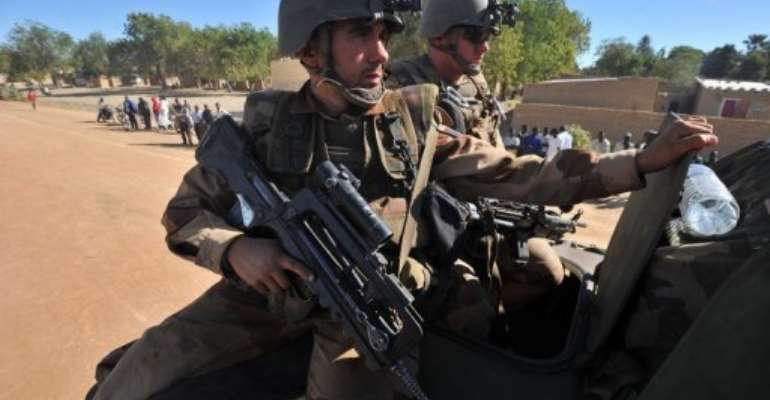 French soldiers arrive in the city of Diabaly on January 21, 2013. By Issouf Sanogo (AFP/File)

PARIS (AFP) - France channelled millions of dollars in ransom payments to the Al-Qaeda-linked militants its troops are currently fighting in Mali, according to a former US ambassador in the region.

In an interview aired Friday, Vicki Huddleston said France had paid $17 million to free French hostages seized from a uranium mine in its former colony Niger in 2010.

Huddleston, the US ambassador to Mali from 2002-05, said Germany, other European countries with the exception of Britain, and Canada, had also paid ransoms which have served to finance the armed Islamist groups which last year seized control of northern Mali.

She said a total of as much as $89 million could have been paid out between 2004-11, although, as it was paid through intermediaries including the Malian army, it was unclear how much would have reached Al-Qaeda in the Islamic Maghreb (AQIM) and its allies.

France has never confirmed paying to secure the release of hostages and it has stopped doing so since President Francois Hollande came to power last year, according to well-placed diplomatic sources.

Its policy of paying ransoms under Hollande's predecessor Nicolas Sarkozy was well documented by journalists, an open secret in diplomatic circles and a source of friction with Algeria, Britain and the United States, all of whom opposed the policy.

Huddleston is the most senior official yet to explicitly confirm the payment of ransoms and the first to do so on the record.

"About two years ago... the AQIM took French hostages at the yellowcake uranium mine in northern Niger, and France paid ransoms for the release of these hostages," the retired career diplomat told French television station ITele.

"The alleged amount is 17 million," she said. "Of course France didn't walk over to the Salafis and say 'here is your 17 million dollars'.

"The ransoms, like other ransoms, were paid indirectly, ended in the hands of the Malian government and were turned over, at least part of it, to the Salafis (Islamist extremists)."

Although France, at the time, denied speculation that it paid money for the release of its nationals, it was well known among diplomats, she added.

"When governments might have denied that they paid ransoms... everyone is pretty much aware that money has passed hands indirectly through different accounts and it ends in the treasury, let us say, of the AQIM."

Asked how much had been paid in ransoms between 2004 and 2011, Huddleston said: "The number I have seen is 89 million dollars so that to me seems probably correct.

"Various European governments paid ransoms through the Malian government to obtain the release of their citizens and that allowed AQIM to grow strong, buy weapons and recruit."

Herve Ghesquiere, one of two French TV journalists held by the Taliban in Afghanistan for over a year, last year published a memoir, "547 days", which quotes Sarkozy as saying France had no problem paying ransoms.

"For me that has never been a problem. We know how to do money," Sarkozy was quoted as saying. The same book quoted Sarkozy's foreign minister Alain Juppe as saying France's intelligence agency, the DGSE, handled the negotiations.

The payment of ransoms in north Africa has drawn comparison with western and Saudi Arabian financing of Islamist resistants to the Soviet occupation of Afghanistan in the 1980s.

That support fuelled the growth of Al-Qaeda under Osama bin Laden and the weapons that flooded into Afghanistan ended up being turned on NATO troops when the Taliban was overthrown in the aftermath of the September 11, 2001 attacks on the United States.