Kumasi Archbishop expresses fear over the future leadership of the nation 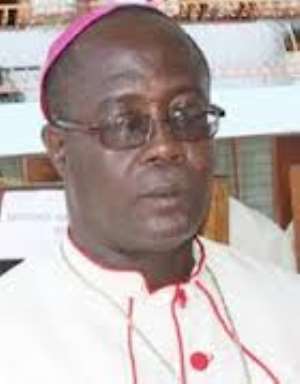 Kumasi, Jan 29, GNA - The Metropolitan Archbishop of the Catholic Church in Kumasi, the Most Reverend Justice Gabriel Yaw Anokye, has raised fears about the future leadership of the nation due to the growing acts of indiscipline and negative behavior among the youth.

He said the current acts of indiscipline and social vices among the youth posed a threat to the future leadership and development of the nation and there was the need for all concerned to work together to bring the youth on the right path.

Addressing a youth rally in Kumasi, Most Reverend Anokye, also advised the youth to resist peer pressure and bad influences that force them to indulge in negative acts that could ruin their future.

The rally, which had the theme: 'We walk by faith' was organised by the Metropolitan Archdiocese and brought together over 2000 youth of the Catholic Church from the archdiocese.

He advised the youth to desist from craving for money through short cut means since it could lead them to doing things, which could be against their faith and societal norms as well.

'Avoid premarital sex and rather concentrate on your professional or vocational training for the development of your future,' he said and urged parents to provide the needs of their children so that they would not be influenced by their peers to do bad things.

The Archbishop called on the youth to be wise and also be careful so that they would not copy things blindly either from the media or from their peers.

He challenged them to identify their faith and protect it at all times by praying and leading righteous lives for others to emulate, adding that there was the need for them to let their belief reflect in their daily lives.

Archbishop Anokye said there were over 362,000 baptized Catholics in the Kumasi Archdiocese and out of the number, 65 per cent of them were below the ages of 35.

He said since the future development and sustenance of the church depended on the youth, the church would continue to put in place prudent measures that would strengthen and position them to lead the church in future.

Mr Anthony Osei-Assibey, Director of the Catholic Charismatic Renewal, called on all Christians, especially Catholics to lead the crusade against all forms of social vices in society.

He said there was the need for all Christian youths to be good ambassadors of Christ since He is the light of the world.

Mr Osei-Assibey urged Christians to nurture their faith by reading the bible all the time, pray without ceasing as well as letting their belief reflect in their lives.

He said there was the need for Christians to protect their faith by being vigilant from people who would like to corrupt them from their faith to join other forms of worship or religions.

Reverend Father Cecilia Luis Adu-Poku, the Archdiocesan Youth Chaplain in a welcome address, said the church would continue to liaise with the youth to collaborate to plan on how to develop programmes to support their development and proper training.

He said the church would continue to support activities of the youth who form majority of the population of the church.